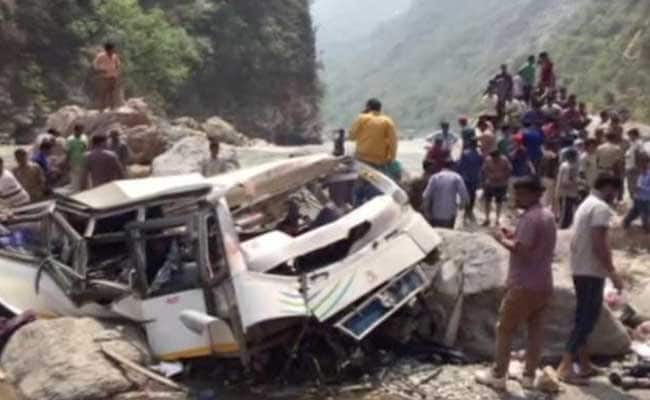 A bus with 56 passengers on board fell into the Tons river in Shimla. (Reuters)

Shimla: A bus has swerved off a mountain road and plunged into a deep ravine in Himachal Pradesh's Shimla district, killing at least 44 people, an official said today. The bus with 56 passengers on board plunged into a river around 115 kilometres from Shimla.

"A preliminary report shows that a private bus fell into a gorge and has killed more than 40 people. The latest report given to me shows 44 people have been killed," Rohan Chand Thakur, district commissioner of Shimla, told news agency AFP. Police rushed to the scene where rescue efforts are under way, he added.

It was not immediately clear what caused the accident, or whether any of the survivors were injured.

The private bus was on its way to Tunni village in Shimla district, from Vikas Nagar in neighbouring state Uttarakhand, when it skidded off the road and fell into the Tons river. The accident occurred in Gumma area in Nerva tehsil.

There are more than 150,000 fatalities annually due to poor roads in the country, coupled with reckless driving.

Promoted
Listen to the latest songs, only on JioSaavn.com
More details are awaited.

(With inputs from AFP and IANS)