"Like Karan-Arjun": 2 "Inseparable" Wild Elephants Released In UP Tiger Reserve

The two bull elephants share a close bonding and they are never more than 10 metres apart, said forest officials, who have now named them as 'Karan' and 'Arjun'. 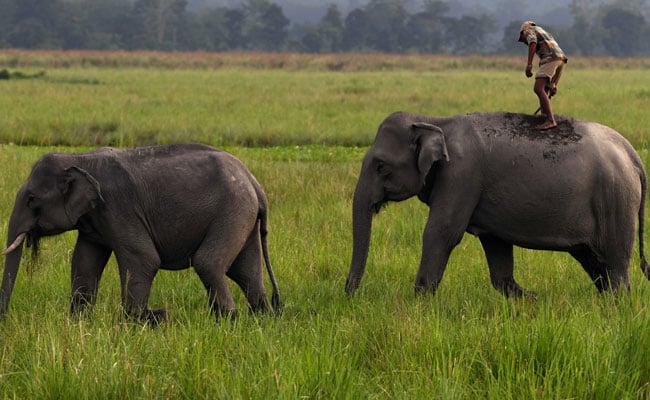 The two wild tuskers, who have been released in the Pilibhit Tiger Reserve were staying 'inseparable' like brother, said an official.

The two bull elephants share a close bonding and they are never more than 10 metres apart, said forest officials, who have now named them as 'Karan' and 'Arjun'.

The two tuskers were tranquilized on Wednesday, and released into Pilibhit Tiger Reserve (PTR) late on Thursday after a gruelling process.

Chief Conservator of Forests, Jhansi, and in-charge of elephant rescue operations, P P Singh said, "Both tuskers moved together. We never saw them apart. Even when we first tranquillized one of the tuskers on Wednesday, any other elephant would have tried to escape to save his life.

"However, here it was very different. The other elephant remained in the same area and did not flee. In fact, the tusker moved in about 50-metre radius from the spot."

Experts said it was suspected that the matriarch (eldest cow elephant who leads the herd) may have forced the two adult elephants to leave the herd to "stop inbreeding".

"It is believed that when the two bull elephants may have tried to mate with another cow elephant, the matriarch may have thrown them out of the herd.

"Even in a few cases, when male elephants turn adults, the matriarch makes them leave so that they can mate with cow elephants of another herd.

"Genetic inbreeding within the herd is not considered good among animals," said the official. The tuskers are around 20 years old.

These two wild elephants were separated from their herd in probably Nepal and were first spotted in agricultural belt of Pilibhit's Amaria block on June 24.

As they strayed into the villages of Bareilly and Rampur and parts of Rudrapur, the two tuskers drew large crowds, who might not have ever seen such adult male elephants in their lives.

The two elephants were tranquillized and tied to a tree in Rampur on Wednesday night. They were again given "booster sedation" to load them into a vehicle on Thursday when they were finally transported to Pilibhit.

With the help of JCB machines, hydra vehicle and three cow elephants from Dudhwa Tiger Reserve, the two elephant brothers were loaded in separate vehicles and taken to their destination.