Several fire tenders and many fire personnel are engaged in fire-fighting operations, an official said. 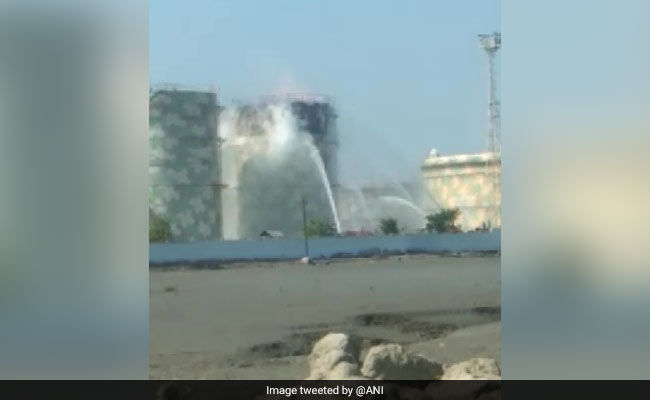 The blaze erupted in the afternoon and efforts are on to put out the flames, an officer said

At least two person were killed today while as many others went missing apparently after a methanol storage tank of a private firm located near Kandla Port in Gujarat's Kutch district caught fire after an explosion, a police officer said.

The Deendayal Port Trust (DPT) stated that the roof of the tank blew away after a fire erupted in a storage tank.

The fire broke out around 12 noon and has been raging since the last eight hours.

The incident occurred when an employee of M/S IMC terminal, located around 16 kms away from Gandhidhan in Kutch district, and three labourers were conducting a routine inspection of the storage tank, the officer said.

At least ten fire tenders of the Deendayal Port Trust (DPT) of Kandla and of Gandhidham municipality have been pressed into service to douse the flames.

"This terminal, having storage tanks, is situated in Kandla town, close to the port. When a company employee and three labourers went up on one of the methanol tanks for a routine inspection, the roof suddenly blew away with a blast. Fire-fighting is still on," said Deputy SP, Dhananjaysinh Vaghela.

While two bodies have been found, two more persons are still missing, he said.

In a release, the Deendayal Port Trust (DPT) said fire fighting operations are on with foam.

"Fire broke out in one of the tanks of M/s IMC terminal at Kandla. Fire took place in a Methanol tank. Due to fire, the roof of the tank blew out. Currently, fire fighting is under progress by foam media by DPT fire brigade section, IMC team and other associated terminals," it stated.

The DPT further stated that "cooling of another nearby tank is being done by medium velocity water sprinklers".