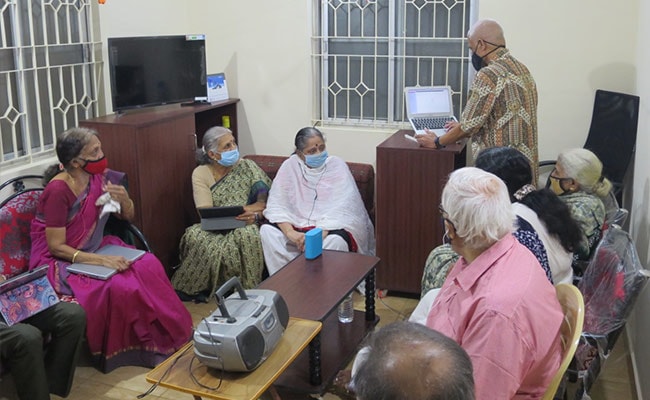 Since March they have uploaded 80 programmes.

Senior citizens at a private home for the elderly in Coimbatore are literally making waves by launching a podcast called Tapovani, to fighting the lockdown triggered boredom.

At Tapovan, a private senior citizens home in Coimbatore, V Shridhar  and TR Anantharama Krishnan have rediscovered their musical talent after nearly twenty five years. Mr Shridhar plays violin and Mr Krishnan the mridangam. Often they record their performances and share it as on their community's audio podcast. They educate and entertain themselves as well as many who listen to them on internet around the world.

Mr Shridhar, who was suffering from depression after his father passed away says he's out of it. He told NDTV, "We don't feel older, in fact we feel younger and younger.  When we give interviews, we share knowledge which youngsters can pick up."

Their programming ranges from music, bhajans, interviews to story telling. Mr Shridhar's musical team mate Mr Krishnan said, "In old age, people normally want to separate themselves. But now here nobody wants to do that. They always want to talk to people, gain mutual knowledge."

In another part of the gated community 69-year-old retired senior bank executive Rama Sampathkumar is busy recording a story. She loves story telling and interviewing several accomplished people in the community/on their expertise, achievements and untold stories. Rama has a huge fan following and she has a big dream now. She wants to interview her favourite star Hema Malini, "I would like to interview Hema Malini and if I ever get a chance, it will be a great day for me."

Since March this community has uploaded 80 programmes including interviews with doctors, counsellors and even workers and house maids.

62-year-old retired chartered and cost accountant K Subramanian has passionately learnt the ropes of production and post production using his laptop so the community's content can reach the world. He said, "This really came as a succor to me. If had I known about this in my 20s I may have had a different career. I urge senior citizens to learn a new domain."

The project was initiated by 75-year-old resident, Prof Sreedher Ramamurthy, a former community radio specialist. This model, he says, is set to be replicated elsewhere in the country. "The Ministry of Social Justice and Empowerment have asked me to conduct a similar experiment at ten different senior citizen homes. It will be mini radio station for senior citizens by senior citizen to senior citizens," he said.