Tamil Nadu witnessed heavy rains last week and a depression over Bay of Bengal crossed the coast on November 11. 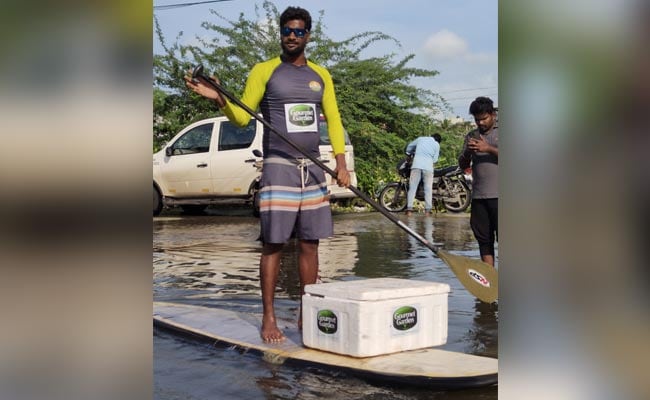 A fruit and vegetable supply start-up has deployed paddle boards in Chennai to reach out to customers in low-lying areas, flooded due to heavy rains over the week.

The start-up, called Gourmet Garden, has come as a relief for residents during the rainy season. P Saranraj, who lives in Pallikaranai, an area where an overflowing lake had made the area unaccessible said,

"I was thrilled. We got our vegetable. Other platforms had suspended services."

Anjali George, an engineer-turned-marketing professional in the Velacherry neighbourhood was surprised to receive the delivery. She said that she was unaware that the delivery would made even after heavy rains.

"I am impressed" she told NDTV. "I live on the first floor and there was waist deep waters around my house that day".

Speaking to NDTV, co-founder Vishal Narayanaswamy, said that they roped in a surf school in Chennai to ensure that their team can keep up the deliveries. "I learnt surfing 10 years ago. In 2015, we used stand-up paddle boards to rescue people. This time, it's not that bad and we thought we will use it to deliver essentials".

Appu a surf coach, and founder of Ocean Delight Surf School says he's happy about his new role of a delivery man. He said "It's a good cause. Its unsafe to walk in this condition and a lot easier to deliver using a stand-up paddle".

"I believe this will also promote surfing," Mr Appu added.

The team has delivered to more than 100 customers using the paddle in areas around Velachery, an area which often gets flooded after heavy rains. The start-up says it does not charge anything extra.

Tamil Nadu witnessed heavy rains last week and a depression over Bay of Bengal crossed the coast on November 11. Chennai received 21cm rain on Saturday and Sunday, the highest since the 2015 floods.