Pongal 2018: Bonfires made using mats, paper, clothes and cardboard boxes dotted the streets of Chennai from as early as four in the morning. An airport official said the there have been no flight operations since 3:30 am due to the smog and low runway visibility.

Pongal 2018: At least 10 flights arriving in Chennai were delayed due to row visibility.

Chennai: Flight operations in Chennai were suspended for at least five hours this morning due to thick smog and poor visibility on the runway as Tamil Nadu celebrates the beginning of Pongal festivities with 'Bhogi'. The celebrations started this morning with people setting bonfires on the streets with agricultural and household waste. The Air Quality Index in several parts of the city was in the "hazardous" category. Train services too were affected.

Over 40 ten international and domestic were either cancelled or delayed. Flight operations have resumed. A senior officer at the airport said earlier this morning, "The visibility has dipped to 50 metres and since 3:30 am we have no flight activity."

Southern Railway officials said "most" inter-city and inter-state trains arriving in the city were delayed by "an average of 30-40 minutes," while outbound trains ran slow. Suburban rail services were also delayed by about half an hour but resumed normal operations by around 9 am, they said.

Bonfires made using mats, paper, clothes and cardboard boxes dotted the streets of Chennai from as early as four in the morning. T Saravanan, whose family set fire to their old household items in front of their home in Thiruvanmiyur area and danced to drumbeats said 'Bhogi' is an important part of the Tamil culture. "We know it pollutes the air so we avoid (burning) plastics and tyre," he said. 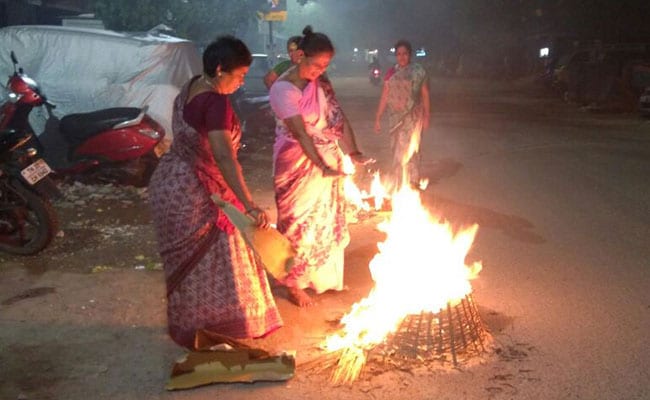 Pongal 2018: People set bonfires on Chennai streets from as early as 4 am.

Promoted
Listen to the latest songs, only on JioSaavn.com
Over the last ten years, the pollution control board in Tamil Nadu has been raising awareness ahead of Pongal, asking people and children in particular to stop burning materials. They also award youngsters who spread the message. A senior officer said, "Bhogi is still a challenge as it's seen as part of a festival. We've brought down burning of tyres and plastics but a lot of awareness still need to be raised."

Bharat Jain, whose flight to Mumbai has been delayed said, "It's in a mess. I have an important business meet in Mumbai. All would get off track."
Comments
Pongal 2018Chennai FlightsPongal Bhogi