We Number Crunched. But This Is Why BJP Won Assam

Assam scripted history on May 19. As the dust gradually settles and the new government firms its grip over the administration, the swayamsevaks of the Sangh have gone back to do what they do, irrespective of what the political mandate is. For them, service towards Bharat Mata is an unfettered commitment towards nationalism and not a means for an electoral end. Therefore, this victory in Assam goes beyond seat share percentages, electoral margins and other numericals. This is an ideological win after generations and decades of their struggle in Assam.

When Ram Madhav ji uses the term "dream alliance" to describe the social coalition he helped forge in Assam, the usage of the word "dream" should be carefully understood. It is important here to recount Assam's past in order to view the May 19 phenomenon in context.

In 1962, when Nehru allegedly bade farewell to Assam, without even putting up a show against the Chinese aggression, the Assamese subconscious was deeply hurt. The subsequent refinery movement, language movement and complete neglect of any developmental focus in the region gave rise to the Assam agitation in 1978. Assam boiled and simmered for almost a decade. The regional sentiments against the national cohesion of an akhand sanskritik parampara very quickly germinated and proliferated in the form of the fateful agitation, creating a political dent despite the socio-cultural, secular and multi-hued ecosystem of Assam.

Throughout these years, Congress had mastered "ali-kuli" politics, the term attributed to Devakanta Baruah, a close aide to Indira Gandhi. For Congress, electoral wins happened - year after year - with the en masse 60 per cent ali-kuli vote bank. They never bothered with forging a larger unity of Assamese society or rebuilding the national discourse in the alienated part or addressing key issues of developmental concerns. This vote-bank based electoral laziness further alienated Assam from the rest of the country.

Even the highly popular Assam Movement, which was led by upper caste Assamese, could not bring diverse groups of Assamese within its fold. Unifying Assam's Brahmaputra and the Barak Valley remained a distant dream.

However, 2016 was different. The BJP stitched together an unprecedented social alliance offering a common platform to the Assamese, the Bengalis, tea garden labourers, the Adivasis, the Nepalis, the Hindi -speaking and the indigenous Muslims. It is this "dream alliance" Ram Madhav ji refers to.

The decision of the people to come forward and showcase a united shakti has been a perseverant journey of the Sangh. The RSS' selfless and ubiquitous service to the nation is well known. Brimming with never-ending energy, volunteers from the RSS have donated generations of seva and shrama among the communities, tribes, disadvantaged and the marginalised.

Ekal Vidyalayas - the volunteer-run, self-sustaining, one-teacher schools have been serving the tribal communities for decades and have surpassed any private institution in their sheer reach and impact in just one state. More than 100 hostels in Assam house students from other parts of the North East.

More than 7,000 swasthya rakshaks, trained for self-employment in homeopathy and naturopathy, have been helping to organise the eight-days long dhanvantari yatra every year in Assam. More than 200 doctors from all across the nation come over to Assam in order to serve - do seva - through various health camps, all across the state. Truck-loads of donated medicines are also distributed among the needy during the dhanvantari yatra.

Every year the SEIL (Students' Experience in Interstate Living), an ABVP organisation, sends young students from north-eastern states to the other parts of India. By exposing the otherwise neglected section of Assam's population to the mainstream narrative and culture in India, seeds of an emotional and historically-obliterated natal connect with Bharat Mata have been reignited. The building of this critical mass of patriotic people's voice in Assam that chose to identify Asomi Aai with Bharat Mata was a gradual and organic process.

Assam's victory, therefore, is the victory of the Sangh's definition of what democracy means for India, supported and asserted by the collective will of the people. For instance, the reverberation of the heroism of Lachit Borphukan - a local historical icon - who took it upon itself to free the land from foreign aggression and the anger of the more than 250 Satradhikars against the illegal occupation of Satra land, informed issues like the illegal migration from Bangladesh in Assam. These decisions to culturally interpret issues of national concern were not taken in a day.

From connecting local issues to national concerns, Assam gradually reconnected with the national discourse, and in 2016, rightfully demanded its legitimate share for swift and equitable development. Impatient and passionate aspirations of the youth aggressively questioned the status quo and rejected those who failed to provide dignified employment opportunities. General citizens demanded a decent standard of living, health, education and equal opportunities of growth beyond the ali-kuli placation of policy plans.

This seemingly electoral - but indeed a political and ideological -  success in Assam has been scripted by a vote for change in the state. It is a vote shunning the political laziness of cherry-picked constituency victories towards a more cohesive and collective will of the people. It is an assertive people's mandate that has in unison and consciously moved towards a reunification with the cultural nationalist narrative of akhand sanskritik parampara and the political narrative of cohesive nationalism for a better future.

In India, when the nation is defined as a feminine form, as Bharat Mata, there is an emotional and cultural context to that definition. Nationalism, then, must be looked at with its etymological root "nasci" in mind. "Nasci" means "by birth". And when a relationship as emotional as that of a mother and a child is being considered, all other concerns become subservient to emotions.

Therefore, when in one of the first public rallies together with the BJP, AGP leader, Prafulla Mahanta, AGP chief Atul Bora and BPF chief Hagrama Mohillary roared "Bharat Mata ki Jai", there was a victory already clinched. The numerical electoral victory was a by-product of this emotional win - the coming together of the Asomi Aai and Bharat Mata.

Two days prior to the first phase of polls in Assam, Hiren Gohain, a celebrated intellectual of the state, in a meeting attended by 40 other intellectuals of Assam, openly appealed to the people not to vote for the BJP. On 4th and 11th of April, people - more than 84% of the electorate in Assam - defied this "intellectual fatwa". One could only conjecture on common psephology wisdom then and assert that people had voted for "change", but on May 19, the form in which change manifested itself was clear. Showing a spectacular increase in seats from five in 2011 to 60 in 2016, the BJP has made inroads into a territory, which many are reluctant to acknowledge. And this time, it was not just the party, but also an emphatic voice of the people - a historic 84% plus voters - speaking a national language very few wanted to hear.

The kind of an emphatic electoral victory that Assam clinched on May 19  has roots in a strong urge to succeed, to win. This urge can only be sustained by a perennial hunger that propels a continuous and consistent battle for a vision against all odds. In the case of Assam, cohesive nationalism was that one goal, for which generations of swayamsevaks and karyakartas sacrificed their lives, envisioning a victory as defining as this. 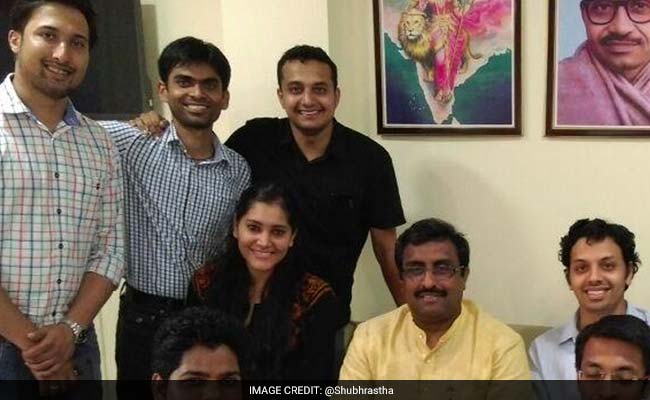 We had the unique opportunity of working on the Assam election campaign for BJP under the mentorship of Ram Madhav ji. We saw what it takes for an organisation to sacrifice and to persevere, and for swayamsevaks and karyakartas to continue to struggle and serve without any attachment with short-term goals. We saw, at first hand, a history being written.