'The Call Dropped and My Heart Sank'

It is exactly a year since the devastating floods hit Kashmir. I want to share the emotional trauma of reporting from the Valley which turned into a huge, swallowing lake while my own family was stuck in the waters.

It was a sunny Sunday in 2014. The incessant rain for the last few days had swollen the Jhelum river. But nobody had thought the river's fury would unleash on "Earth's Paradise" and turn it into hell. But it did. The embankments broke and the waters entered Srinagar city.

A text message from the senior most army officer in the valley woke me up at 6:10 in the morning. It said, "BB (Badami Bagh) Cantt flooded due to breach near Shivpora at midnight. Evacuation of personnel and families in progress." The message stunned me. I called him for more details. He told me the army's helipad was also inundated by the waters which had swept across the cantonment during the night. I passed on the information to my office and immediately set out for work.

On my way to office, I saw rapidly-moving waters discovering new areas of the city. In a few hours, most parts of the city were under water, and its people were still coming to terms with what was happening so fast -the worst floods in over a century in Jammu and Kashmir.

We began reporting live from the not-so-submerged patches. Soon I was told our office has also got submerged. We kept reporting live from different locations. Our own lives were vulnerable. We got a flood of frantic calls and SMS messages from distraught people stuck on rooftops. By afternoon, the phone lines were down. Services from all the network providers stopped almost simultaneously. The landlines went next. There was no way we could gather news now, no way could we contact our Delhi office. All land routes had been cut off, our movement got extremely curtailed. 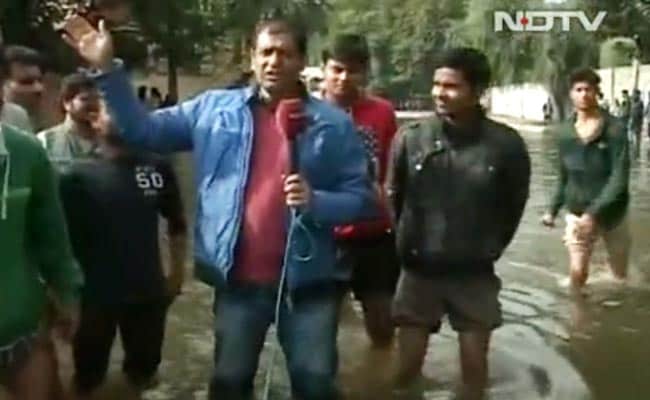 Within a few hours, much of Srinagar, including the NDTV office in Srinagar was inundated by water.

As the clock was ticking, worries for my family were also growing. There was only Aircel with a patchy network to rely on. Luckily, I got through to my sister. She told me that they were on the second floor of our house and that the water levels were constantly rising. I spoke to my father and tried to console him. He asked me why didn't I warn him about the intensity of the floods during the the day. The call dropped and my heart sank.

Our technical capacities were hampered. Our satellite van was running out of fuel. In the evening, I met 27-year-old Hilal who was getting married the next day. Hilal's devastated family lost everything to the floods. He had to postpone the wedding. The situation was absolutely chaotic, but through our reporting, we tried to act as a bridge between people. We decided to move to the Kashmir University, which had turned into an impromptu relief camp. 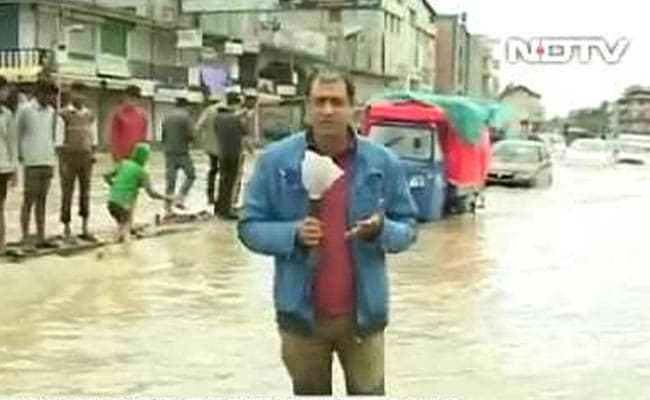 Zafar Iqbal's house was also destroyed in the floods.

My own house was destroyed by the floods. My parents shifted all their belongings to the first floor after the ground floor got inundated. But soon water gushed onto the first floor as well destroying everything. As the waters kept constantly rising, my family was forced to take refuge under the rooftop. The priority was to get my sister and her one-month-old baby to safety, but there was no way help could reach them. After three days, my sister and her baby were evacuated in a boat.

The response of the people was a unified and collective one. Kashmiris faced the floods heroically and reached out to help each other. The response from ordinary people from rest of the country was also extremely heartening. They tried their best to help those in distress. But the state has been found lacking. What is ironic is that Kashmir floods were not declared as a 'national calamity' and international aid agencies were barred from sending aid directly into Kashmir.

In the end, people have been mostly left to fend for themselves for rebuilding their lives. But history shows Kashmiris are resilient, dignified and strong people. They have overcome and they shall overcome.

Disclaimer: The opinions expressed within this article are the personal opinions of the author. The facts and opinions appearing in the article do not reflect the views of NDTV and NDTV does not assume any responsibility or liability for the same.
Comments
kashmir floodsfloods in Jammu and KashmirSheikh Zaffar Iqbalreporting on floods