Ravish Kumar On An Insignificant Man And What It Exposes

The irony may make you chuckle. Just a day after a survey from the other side of the world told you that 55 per cent of Indians want a strong leader at the helm of affairs, a film opens at the theatres that tells the story of a leader who billed his insignificance as his biggest strength. That's why you should consider watching An Insignificant Man - a film made by people who are still in their 30s but one that debunks myths that no battle can be won against a strong leader and a strong party and shows a party without any resources can be a challenger to parties with all kinds of resources.

The film is not just the journey of the Aam Aadmi Party as it emerged with dreams of political change; it also chronicles the journey of those who wanted to see this change up close. Khushboo Ranka and Vinay Shukla must have been 26 at the time. When the scope of the film started to broaden, Khushboo reached out to students of Delhi University for help and trained them in camera and sound. Before that, Khushboo worked with filmmaker Anand Gandhi on Ship Of Theseus. Young men and women, barely 21 or 22, shot a large part of this film. More than 50 per cent of this team were girls. You could say that the age of the people who were dreaming of changing politics was curiously in sync with the age of people who had decided to document it.

Arvind Kejriwal may be the hero of the film, but Yogendra Yadav too emerges as no less than one. Arvind Kejriwal and Yogendra Yadav both stress the politics of transparency and collective decision-making, but when it comes to the process of winning elections, both start clashing with their own principles. Sure, both seem to fail for a while, but their intent to change politics doesn't change - even though politics does end up changing them.

It's evident that in an effort to bring down 400 hours of footage to a one-and-a-half hour film, a significant portion of history does not make it to the version we see. The film has been edited so that often, you begin to see it through the prism of Arvind Kejriwal and Yogendra Yadav's eventual clash - this is what creates the thrill of watching it. The age of private channels and social media first changed Delhi into a media-obsessed society. The anchor started believing that they could change politics, but in this film you can see how politics is changing the anchor. Often, the film will make you laugh. You will laugh at the anchor, you will laugh at reporters, you will laugh at media surveys and you will laugh at yourself. 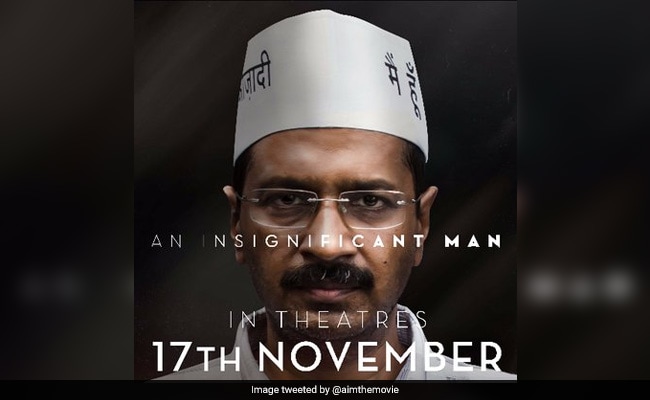 An Insignificant Man debunks myths that no battle can be won against a strong leader.

Even today, for millions of people, politics remains a mystery. What is the leader like behind closed doors? When NDTV produced its programmes on 24 hours with leaders on the campaign trail, its biggest draw was the exposure of what the leader is like in their home and at their dining table. This film doesn't catch the leader at his home, but in the space where he is prepping himself for politics. How Arvind Kejriwal and Kumar Vishwas laugh at each other while preparing taglines for the media is a treat to watch. Within the film, they are seen watching a movie together. I don't know if they will watch this one together or not.

A film like this will not get made in India again because now perhaps even the Aam Aadmi Party would not allow any filmmaker such access. Everyone's stake at the political poker table has grown. Films like these are often produced abroad but in India, audiences of every political section should watch it. Supporters of Congress and BJP should watch it the most. How Kejriwal smashes Sheila Dikshit as an insignificant man and the BJP's arrogance in dismissing his organisational skills are big lessons.

The glowing hallmark of a democracy is often when someone insignificant actually becomes the leader. This is why Narendra Modi in 2014 stresses himself as a tea-seller though he was a three-term Chief Minister. Everyone forgot that a Chief Minister was staking claim to be a Prime Minister and started believing that a tea-seller was about to get the country's top job. Don't mock the ordinary. Often, it is precisely what becomes extra-ordinary. The film may seem to be about Kejriwal but it is in truth about the common man that Kejriwal represents.

This film offers different perspectives. How politics picks its issues, deliberates on them and how conveniently some of these are marginalised. You will walk out of the theatre a better voter after watching all of this. This film is not a historical document. That document was the one which was snipped away on the editing table. You cannot understand the Anna movement without the characters of Anna Hazare, Kiran Bedi, Prashant Bhushan and Baba Ramdev. But this film makes it clear that its story is of the making of the Aam Aadmi Party and its first big promotion to power.