For major regional partners that consistently declare a strong friendship based on civilizational ties, India and Iran seem to have hit a bumpy patch - one that has the potential to expose serious differences between Tehran and Delhi, as the sheen of Prime Minister Modi's May 2016 visit to the Iranian capital wears off.

While Iran drags its feet on awarding a crucial contract for gas exploration in its Farzad B offshore field to ONGC Videsh, India has decided to cut back on oil imports from Iran by 3 million tons (roughly 25 percent) in the current financial year. (India imports over 6% of its oil from Iran, making it Iran's second-largest customer of crude oil)

Now, the already tense situation has taken yet another unpleasant turn, with Tehran retaliating by reducing Delhi's window of payment for crude purchases from 90 days to 60 days, and reportedly cutting freight discounts offered to Indian state -owned oil companies by the National Iranian Oil Company. Both benefits have made Iranian crude attractive to Indian companies in the past, and in fact, Iran has consistently given oil to India on credit earlier, too.

On their own, as global crude prices fall, these developments seem to be routine: tough price negotiations between two regional heavyweights aimed at ensuring both get the best deal possible. While Iran is looking for strong, competitive bids on a gas field that India has dragged its feet on for at least seven years, India is driven by a search for the best prices for its fuel imports that supply 80 percent of its energy needs. An Economic Times report quotes sources as saying that India was wary of inviting western sanctions against ONGC Videsh Ltd if it went ahead with developing the gas field. But against a wider backdrop of global developments where India is fighting hard to offset China's regional expansionism via the Belt and Road Initiative by working on its own trade and connectivity routes, and a relatively sanctions-free Iran is suspiciously eying Delhi's overtures and warmth towards a belligerent US President and his unambiguous treatment of Iran as a rouge, terror sponsor, could the recent sparring be more than just negotiation tactics?

During Prime Minster Modi's visit to Tehran last year, India committed $500 million towards the Chabahar port project amid much pomp and ceremony, and along with Afghanistan, signed a trilateral agreement for the construction of key road and rail links connecting the port. Iranian scholars who study bilateral ties argue that Delhi's dragging its feet since then is encouraging voices that call Chabahar a sister port to Pakistan's Gawadar to look for ways to involve both Pakistan and China in future phases of its development. In fact, soon after PM Modi's visit to Tehran, Iranian diplomats ruled out exclusivity for India in Chabahar. During that visit, retired Iranian diplomats at the government-backed Tehran think tank, the Institute for Peace and International Studies, said other countries were welcome to bid for future phases. They brushed off suggestions that China's inclusion in Chabahar would be a thorn in India's side, saying India and China must find ways of "changing their mindset" and not use Iran's development as a pawn in their battles for regional supremacy.

As Beijing plans its massive Belt and Road Initiative conference next week, they argue that Tehran faces fewer problems with the Chinese, eager to edge India out of its regional sphere of influence. Iranian commentators are quick to point out that Modi's visit to Iran in 2016 took place after many other major international players. Chinese President Xi Jinping was the first major leader to visit Tehran once its new nuclear deal with world powers including the US, Germany and Russia was signed - a fact not lost on Tehran. 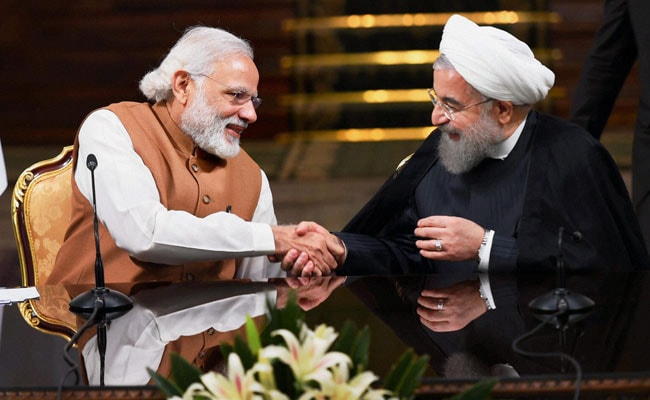 Iran's strategic heft, due mainly to and oil and gas power, has long been a major consideration for India's foreign policy makers. Yet, it was only after the landmark nuclear deal between the P5 1 and Iran in 2015 under the Obama administration, and the subsequent lifting of Iran's international pariah status, that India finally inched forward on the much-awaited Chabahar port project, 13 years after it was first agreed upon. But today, America's threat to review the very deal that brought Iran back into acceptability poses a conundrum for Delhi that is eager to both ensure warm ties with the new US President, as well as continue its strategic and economic engagement with Iran.

New Delhi finds itself in a spot. The message between the lines is that as he plans his meeting with Donald Trump later this year, Prime Minister Modi might be cautious to avoid any steps that could raise eyebrows in Washington. Adding fuel to the fire, some in Tehran say that like the United States, India has "problems with the Islamic world, and Iran is an Islamic state."

Now, as Iran readies for a Presidential election on May 19, and the Ayatollah backs hardliners who accuse President Rouhani of pandering to foreign interests, especially to modernize its oil and gas sector, India has its own list of complaints - accusing Iran of reneging on its promises, even though Delhi has been a steadfast partner throughout the sanctions regime.

Delhi's anger is understandable. Iran is refusing to budge on the gas field India covets even after ONGC Videsh has revised its development plan and costs. In addition, Iran's President Rouhani recently reiterated support for "trusted brother" Pakistan as he announced the completion of the Iranian section of a pipeline to carry natural gas to Pakistan.

Whether the Iranians are expressing their displeasure over the slow progress at Chabahar, or India is doing the same for the delays over the Farzad B gas field contract and being cautious before a crucial US bilateral, the result is a gridlock for the moment. Iran has nearly 10 percent of global oil and over 18 percent of global gas reserves, and as its oil minister said, is confident of other customers for its resources if India cuts back. But while Iran argues its case, Tehran must also realise that India of late has pursued aggressive diplomatic engagements with other oil and gas rich countries in the gulf- Saudi Arabia, Qatar and other GCC countries, and can offset the shortfall from Iranian crude by increasing imports from these.

Delhi will not hesitate to use its new-found leverage with Iran's Sunni neighbours to push for a better deal for itself. Hard fought price negotiations, indeed.

Promoted
Listen to the latest songs, only on JioSaavn.com
Maya Mirchandani is a Senior Fellow at the Observer Research Foundation and Consulting Editor for NDTV's show, India Matters.