Are Kashmiris Not Indian Citizens?

During the 2010 civilian unrest in Kashmir, an all-party delegation led by then Home Minister P Chidambaram visited the Valley to reach out to people and find a way to resolve the crisis. During an interaction in Tangmarg, a young man asked the team members why they didn't feel pain when a part of their body was bleeding - "How is it possible that my arm is being amputated and my body doesn't feel the pain?" The delegation, which included parliamentarians like Arun Jaitley -- now Finance Minister - was stunned by the young Kashmiri man's words.

In the middle of the unrest in which more than 100 civilians were killed by the forces and slogans of "Azadi" were heard across the Valley, the man was trying to ask a group of national leaders whether they considered him a citizen of India. If yes, why didn't the laws that protect every citizen's rights in the country apply to Kashmiris?

On Saturday, seven civilians, among them four teenage students -- the youngest just 14 -- were killed in firing by security forces in Pulwama. Videos showing the troops firing at running youth are in circulation. There is little to guess on what happened that morning, shortly after three militants and a soldier were killed in an encounter.

The teens had bullet wounds above the waist - in their chest, neck and head. Scores received bullet and pellet injuries.

Months before a national election, such a tragedy would have become a huge political issue, had it taken place in any other part of the country. Heads would have rolled; political leaders would have rushed to console the victims' families.

Mandsaur in Madhya Pradesh, the epicenter of farmer protests in June last year during which five farmers were killed in police firing, became a major reason for the exit of the BJP and its formidable chief minister Shivraj Singh Chouhan "Mamaji (uncle)" after 15 straight years in power. The media also highlighted the victims. No one asked why the protesters were throwing stones and attacking the forces in Mandsaur.

In the last three years, more than 300 civilians have been killed in Kashmir. Not a single incident was probed and not a single accused faced trial. More than 16,000 people were injured. The pellet horror has partially or fully blinded hundreds of people. But scarcely has one heard any national leader raising his voice against these civilian killings and mass blindings or seeking a judicial probe and telling countrymen that our citizens are being killed with impunity.

Even pellet firing at 19-month-old baby girl Hiba was not enough to shake the nation's conscience. The youngest pellet victim has already gone through two surgeries in her eye and doctors are still doubtful they can fully restore her eyesight.

Mercifully, no one has accused her of stone-throwing. 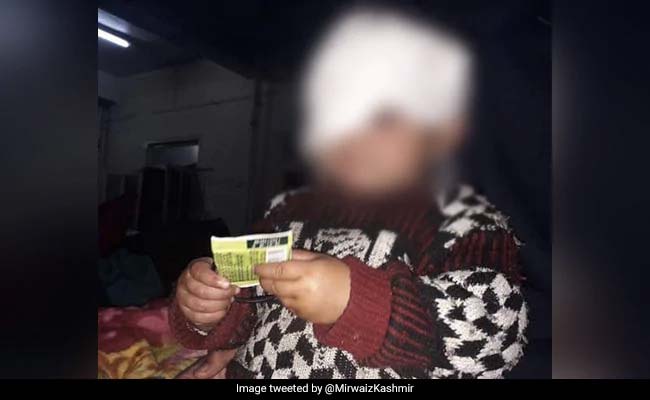 When Congress' leader Ghulam Nabi Azad talked about security forces killing more civilians than militants, he was roasted for the comments. There was hope that things may change for the better when Prime Minister Narendra Modi spoke about not bullets but hugs for Kashmiris in his Independence Day speech last year - "Na goli se na gaali se, Kashmir ki samasya suljegi galay lagane se. (Kashmir's problems can be solved only by embracing its people, not with bullets or abuses)."

Sadly, the words did not translate into reality.

After each killing, the victims have been held responsible for their death.

What they were doing at the site of an encounter is the most predictable question. Why they were killed is never asked. Much of the media describes firing on civilians as "clashes", giving the impression that it is an even match and in a way, justifying it. Government and police handouts are structured on the same lines.

After the Pulwama killings, Governor Satya Pal Malik, instead of taking action against accused, asked people not to rush to encounter sites. In other words, a hint that they were responsible for their own deaths. He didn't condemn the massacre. No probe was ordered to fix responsibility. The state police have literally abdicated their duties.

After the Supreme Court order putting on hold the FIR against Army officer Major Aditya, who was accused of killing of three civilians in firing in January, there is an unwritten rule that every police station is following - not to file any FIR against security forces.

Don't people of the country deserve to know why 8,000 citizens are missing in Kashmir? According to an organization that deals with missing people in Kashmir, the Association of Parents of Disappeared Persons, these people were picked up by security forces and no one knows whether they are dead or alive. There are hundreds of unmarked graves and no one knows who is buried there. People were subjected to unspeakable torture and there were allegations of rape that have never been investigated. Long-pending cases of fake encounters and extra-judicial killings always beg the question - why is the law of the land not working in Kashmir?

Recently, the Supreme Court dismissed a bunch of petitions filed by 750 army men challenging cases registered against alleged excesses in Manipur and Jammu and Kashmir. The top court said: "When there is loss of life, even in an encounter, shouldn't the human life demand that it should be looked into and an investigation should be done?''

In Kashmir, First Information Reports have largely been about recording deaths, ever since the Armed Forces (J&K) Special Power Act was enforced in the state in 1990. Yet, registration of FIRs was acting as a deterrent and helping calm tempers every time civilians were killed by the security forces.

The people of Kashmir became citizens of India in 1954 through a presidential order. As the constitution says, they enjoy rights and privileges like any other Indian citizen. Their rights are also protected by Jammu and Kashmir's own constitution and a separate Ranbir Penal Code. But in reality, it's all confined to the law books and on the ground, constitution and civil rights have literally been kept in suspended animation. By the way, is there any lawyer in the Supreme Court who ever filed a petition or PIL on why laws in India are not being enforced in Kashmir to protect citizen rights?

To begin with, New Delhi's biggest confidence building measure in Kashmir would be to implement the constitution and the law, and to treat the people of Kashmir as equal citizens.

Or is that too much to ask?