The clashes followed the death of three terrorists and a soldier in an encounter at Sirnoo village.

Pulwama encounter: Three terrorists, who were hiding in an orchard, were shot dead in the encounter.

Seven civilians were killed and dozens injured in south Kashmir's Pulwama on Saturday after security forces opened fire during clashes that followed an encounter in which three terrorists were gunned down.

A soldier was also killed in the encounter that broke out early this morning in Pulwama's Sirnoo village. The pre-dawn operation was jointly launched by the army, the police and the CRPF after they received specific information about the presence of three local terrorists in an orchard, police sources said.

The soldier who died in the encounter was identified as Kishan Singh Rajput, hailing from Churu district in Rajasthan.

The violence has led to a tense situation in the region, drawing sharp political reactions. The separatist leadership has called for a three-day strike to condemn the incident, and asked people to march to the headquarters of the Army's Chinar Corps at Badamibagh on Monday. 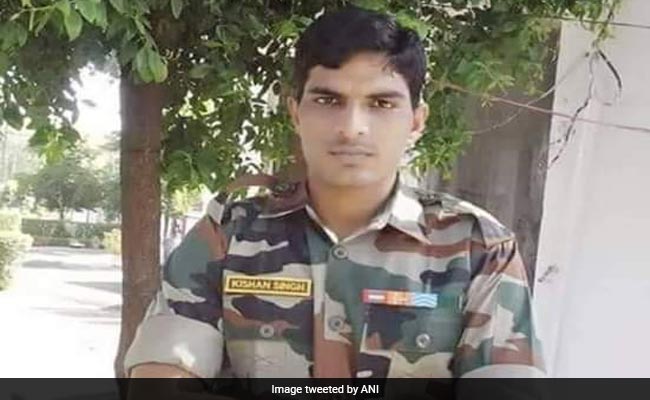 Kishan Singh Rajput, the army soldier who lost his life in the encounter with terrorists in Jammu and Kashmir.

Abid Hussain, one of the civilians killed, was an MBA graduate who had returned from Indonesia a month ago with his Indonesian wife and three-month-old baby. Locals say he was hit by bullets while he was standing outside his house.

Another civilian who died in the shooting was identified as Amir Ahmad.

Jammu and Kashmir leaders Mehbooba Mufti and Omar Abdullah blamed governor's rule in the state for the violence.

No probe enough to bring back the dead innocent civilians.South Kashmir has been reeling under fear for the last 6 https://t.co/yvGQiUPOel this what was expected from Gov rule?The admin has failed in securing civilian lives. Deepest condolences to the bereaved.

Another blood soaked weekend in Kashmir. 6 protestors killed, 1 solider killed in the line of duty. Together with the 3 militants from this morning's encounter that's 10 dead. Reports of many injured at the encounter site. What a horrible day!

Eyewitnesses say the dead locals had bullet injuries in their head and chest. Several other young people injured in pellet gun firing and clashes were taken to hospitals in south Kashmir and state capital Srinagar. Clashes also broke out in neighbouring villages after news of the civilian deaths reached them. Internet services were subsequently suspended in Pulwama.

The army expressed its condolences over the incident. "We condole the unfortunate loss of civilian lives during the Sirnoo (Pulwama) encounter, in which three terrorists were eliminated, a soldier was martyred and many other security personnel seriously injured," a spokesperson said.

Jammu and Kashmir Governor Satya Pal Malik Saturday ordered a probe into the incident and appealed to people to stay off encounter sites. Separatists have called for a 3 day strike and mobile internet in most parts of the state has also been suspended.

Railway services between Kashmir Valley and Banihal town in Jammu region were also cancelled due to the tense situation.

Swearing-In Of Ministers In Gujarat "Likely" In Next 2 Days: BJP