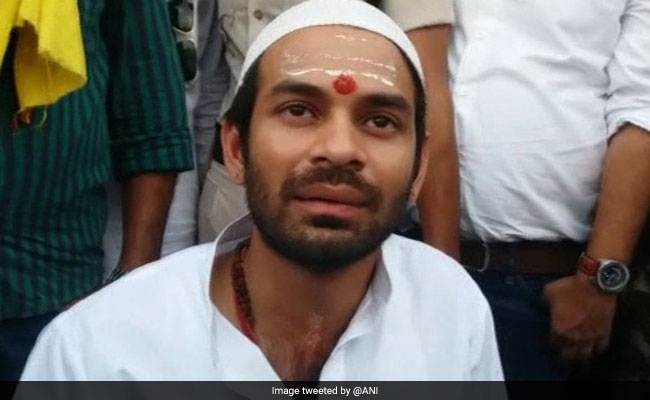 Tej Pratap accuses RSS and BJP of conspiring against him

Rashtriya Janata Dal leader and Lalu Yadav's son Tej Pratap claimed that an armed man "clutched" his hand while he was meeting people at Mahua in Bihar, on the occasion of Eid on Wednesday. Tej Pratap alleged that the incident was a "conspiracy" by the Bharatiya Janata Party (BJP) and Rashtriya Swayamsevak Sangh (RSS) to "kill" him.

"On my way to Mahua, an armed person held my hand and was unwilling to leave. This is a conspiracy by the RSS and BJP to kill me. MLAs, ministers are not safe here, how can commoners be safe?" Tej Pratap told news agency ANI.

The man was spotted by the former state health minister's driver, among the people, who had gathered to greet him in Mahua. Soon after, the driver and others present raised an alarm and the man was handed over to the police.

The RJD leader in July had accused the BJP and the RSS of hacking his official Facebook account in an attempt to create a rift in his family and threatened to file a case, but the ruling JD(U)-BJP government in the state dismissed the charges.

His allegations came after a post appeared on his official Facebook page in which he appeared to be resenting the behaviour of a few leaders of his own party and complained that even his parents did not pay attention to his concern.

The deputy chief minister and BJP leader Sushil Kumar Modi had said Tej Pratap was frustrated after allegedly being overshadowed by his younger brother Tejashwi Yadav.