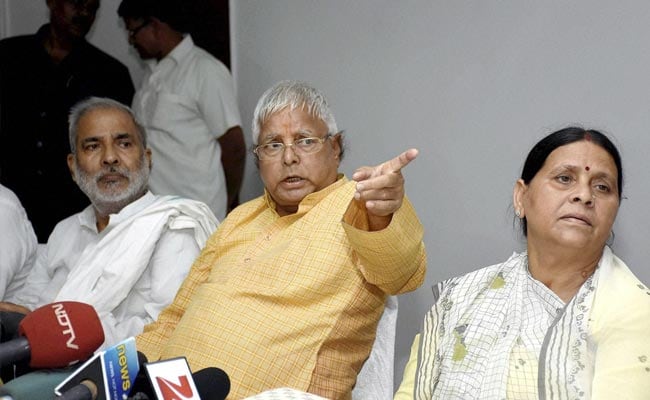 Patna: An FIR was lodged against RJD chief Lalu Prasad today for his statement that the Bihar assembly polls were set to be a "backward versus forward" fight, an election commission official said.

Additional Chief Electoral Officer R. Lakshaman said a First Information Report (FIR) was lodged against Mr Prasad in Raghopur in Vaishali district on charges of violation of the model code of conduct for his statement that the Bihar assembly polls were set to be a "backward versus forward" fight.

This came a day after Chief Election Commissioner Nasim Zaidi during his visit in Patna said any casteist remark was a breach of the EC guidelines, when his attention was drawn to Mr Prasad's statement.

Mr Zaidi said the Bihar chief electoral officer would examine any complaint about the caste remark.

Mr Prasad, the former Bihar Chief Minister, in his first election rally in Raghopur, gave a call to the Dalits and the backward classes including the Other Backward Classes and Economically Backward Classes, to unite to defeat the BJP-led National Democratic Alliance, which he said, intended to end reservations.

"All Dalits and backward classes should unite and vote for the grand alliance of RJD, JD-U and Congress to defeat the BJP-led NDA," he said.

Today, a day after the BJP and its allies slammed Mr Prasad for saying the upcoming assembly polls would be a "backward versus forward fight", he vowed not to be silenced in his fight for the Dalits and OBCs' cause.

"I will continue to fight for the backwards, Dalits and poor. Even if they hang me for it, I am ready, I will not sit silent... I will fight for poor till reservation for them will not increase," he said.

Elections in Bihar to elect the 243-member house will be held in five stages between October 12 and November 5. Counting of votes will be taken up on November 8.