Yeddyurappa to stay away from mutt during Sonia visit 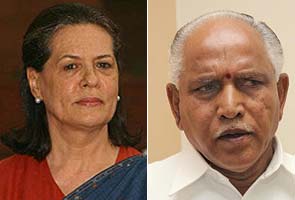 Bangalore: Seeking to set at rest speculation on his future political moves, former Karnataka Chief Minister B S Yeddyurappa has decided to stay away from the forthcoming 105th birthday celebration of the Siddaganga mutt seer Shivakumara Swamiji in which the UPA Chairperson Sonia Gandhi is expected to take part.

Mr Yeddyurappa, who belongs to the dominant Lingayat community, has decided not to attend the celebrations to be held at Tumkur on April 28 in the wake of Mrs Gandhi attending it and with a view not to give room for any political speculation, sources close to the leader said.

They said during a programme held on Sunday as part of the birthday celebrations, Mr Yeddyurappa explained to the seer the reasons for his decision to skip the Tumkur event.

Speculation have been doing rounds in political circles that Mr Yeddyurappa, who has been sulking over Bharatiya Janata Party's (BJP) refusal to re-appoint him as chief minister planned to meet Mrs Gandhi.

Ever since the Karnataka High Court last month quashed an FIR in the illegal mining case and struck down a portion of the Lokayukta report that indicted him leading to his exit as chief minister, Mr Yeddyurappa has been campaigning in vain to return to the top post.

Mrs Sonia Gandhi's participation in the birthday of Siddganga mutt pontiff is seen as an attempt by Congress to win the trust of powerful Lingayat community which had distanced itself from the party.

Promoted
Listen to the latest songs, only on JioSaavn.com
Lingayat leaders in Congress have been nurturing grievance that the party has been ignoring them.