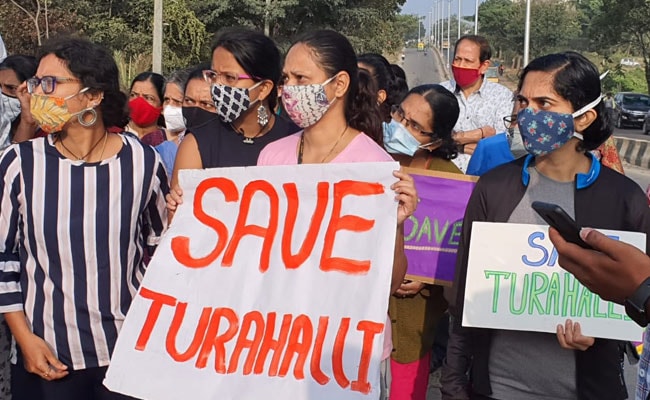 Over 250 people including activists and residents have been protesting against the Karnataka government's move to develop Turahalli minor forest into a tree park. Bulldozers have started rolling into the area on Kanakpura Road on the outskirts of Bengaluru. The protest is being led by 'Changemakers of Kanakpura Road' and 'Clean Up Turahalli'.

In December 2020, Chief Minister BS Yediyurappa unveiled the 'Bengaluru Mission 2022' under which the municipal agency BBMP's administrator Gaurav Gupta said the mini forests in Turahalli, Kadugodi, JP Nagar and Mathikere would be developed and popularised. This had alarmed residents and environment activists.

"Turahalli is the only forest area left in the city. Turahalli minor forest covers 600 acres of land while the reserved forest area adjoining it covers 552 acres. The government wants to construct a tree park here which will hamper the ecosystem and promote mass tourism," Abdul Aleem, 27, software engineer and chief of 'Change Makers of Kanakpura', told NDTV.

"They will build walkways, cycle tracks, toilets, parking space. From deer to peacocks, there are over 125 types of birds in the forest. Where will they go?" Mr Aleem said.

Principal chief conservator of forests Sanjay Mohan said they want to retain the essence of a forest by developing a tree park. "Tree parks is a popular scheme, every MLA of the area wants it. We want to put some benches and make walkways. We already have 135 tree parks in the state. Some residents of the area are objecting to the idea of this, we will try to convince them. If they are not convinced, we will suggest another area," Mr Mohan told NDTV.

Manik Taneja, a mountain bike instructor and resident of Bengaluru, said he is in favour of the tree park. "We have been campaigning for people's access to places like tree parks for outdoor recreational activities, which is very much needed with travel getting limited, this is imperative. The forest department is using only a small area of the entire reserved area for tree park construction. I am in favour the tree park, having seen other tree parks in the city," Mr Taneja told NDTV.

Leo Saldanha, coordinator at the non-profit Environment Support Group and a resident of Bengaluru, told NDTV, "The Turahalli forest area is one of the unique forest spaces in India that many residents and activists have been able to protect despite urbanisation. The move of the state government to build a tree park is a move to hijack the forest space. A forest is a self-perpetuating system; a tree park is not a natural eco-system. It is not the job of the forest department to be involved in making tree parks but the municipal's job."