Hundreds of enthusiastic BJP workers cheered Amit Shah chanting "Modi, Modi" as the "Rath", a modified vehicle, covered little more than one and half kilometre distance with Bachche Gowda, MLA, among others, accompanying him 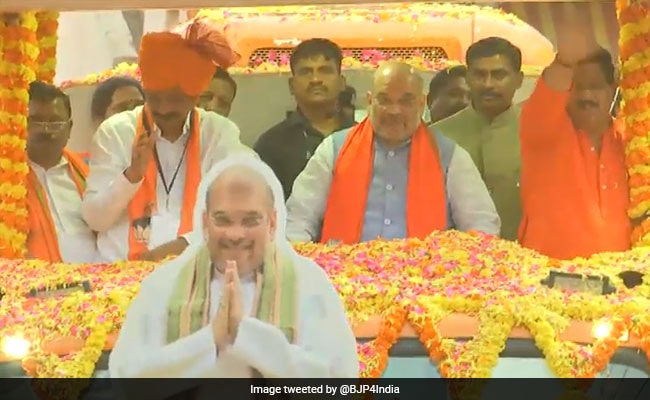 The road show, that began with party workers greeting Amit Shah with a huge garland.

Hundreds of enthusiastic BJP workers cheered Mr Shah chanting "Modi, Modi" as the "Rath", a modified vehicle, covered little more than one and half kilometre distance with Bachche Gowda, MLA, among others, accompanying him.

Thousands of people had gathered all along the route showering flower petals on Amit Shah as the "rath" wound its way in a delirious atmosphere.

The road show, that began with party workers greeting Mr Shah with a huge garland of apples, lasted about 40 minutes.

Ahead of the "rath", BJP supporters sporting saffron turban and holding cutouts, placards and party flags danced to the drum beats, as slogans of ''Modi Modi'' rent the air.

Mr Gowda had lost against Mr Moily in the 2014 Lok Sabha polls by a narrow margin of about 9,500 votes.

Division of Vokkaliga votes was cited as the reason for Mr Gowda's defeat in 2014, as Chief Minister HD Kumaraswamy, who also hails from the same community, had contested from Chikkaballapura then and ended up in third place by garnering over three lakh votes.

BJP and many of Mr Gowda's supporters believe that they have an advantage this time as Vokkaliga votes will consolidate in their favour.

Mr Moily will have to strongly depend on JD(S), that has the strong support of the Vokkaliga community, to retain the seat that has remained a Congress bastion.

However, with animosity between workers of both parties in other constituencies of old Mysuru region like Mandya, Mysore and Hassan, it remains to be seen whether JD(S) workers will completely support Congress and BJP wishes to capitalise on this.

Along with anti-incumbency, Mr Moily is also facing dissidence within the Congress to his disadvantage, with several local leaders opposed to his candidacy, party sources said.

There are 15 candidates in the fray in Chikkaballapura.

Chikkaballapura has eight assembly segments, where Congress has its hold on five, JD(S) two and BJP on one.