Bengaluru Oxygen Shortage: On Monday, at least three hospitals indicated that they were short of oxygen - two of them eventually received the supply. 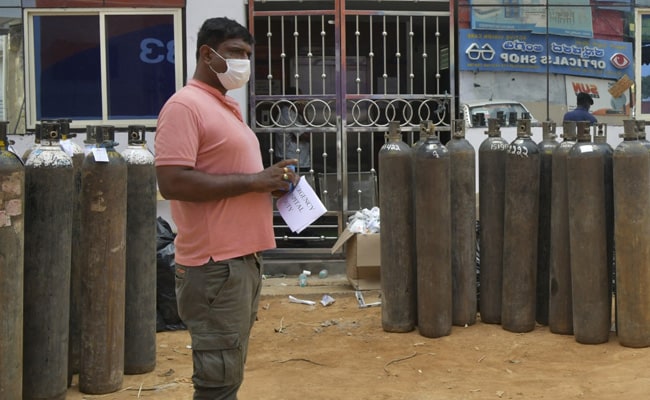 Bengaluru Oxygen Crisis: The demand for oxygen has multiplied overwhelmingly in Karnataka.

Several hospitals in Bengaluru have been sending out appeals for oxygen, some of them even asking patients, who have already been admitted, to find a bed elsewhere as they are running out of the life-giving gas.

On Monday, at least three hospitals indicated that they were short of oxygen - two of them eventually received the supply. But two deaths at Arka Hospital in the city's Yelahanka were reported to be due to a drop in the oxygen supply. Officials, however, said they were still waiting for a report on the deaths.

The development comes close on the heels of the deaths of 23 COVID-19 patients over the course of less than a day in the state's Chamarajanagar district with at least some of the deaths being attributed to shortage of oxygen in the district hospital.

A senior consultant physician at the Apollo Hospitals said that the oxygen consumption in the hospital has gone up by three to four times of what it earlier used to be due to the pandemic.

Explaining the reason for the increase in oxygen demand, Dr Jagadish Chikkegowda said: "The ICUs are fully occupied with more then 90 per cent being Covid patients. But most importantly, earlier, almost 75 per cent of hospital beds hardly required any oxygen supplementation."

"But now with more than 90 per cent being Covid patients. This is making the difference in oxygen consumption," said the Senior Consultant Physician and Critical Care Specialist at Apollo Hospitals.

The state government says meeting oxygen demand is a huge challenge, while also putting some onus on the hospitals for the shortage.

Deputy Chief Minister Dr Ashwath Narayan said, "Many hospitals have not created capacity for the storage of oxygen. The storage tanks have not been built properly and they are dependent on cylinders. And the cylinders they have with them are not sufficient to cater to their requirements. So many are running short of cylinders. And they have been admitting people beyond their capacity."

The demand for oxygen has multiplied overwhelmingly in Karnataka which is reeling from the second wave of the pandemic.

"The consumption in the month of March was around 100 metric tonnes. What we are procuring from the government is about 850 metric tonnes. It has scaled up eight and a half times. Even then we are able to procure and supply every day to the hospitals. We are trying our best and it has been addressed very effectively. It has been a very challenging situation. We are doing our best to mobilise and ensure the supply to all the hospitals," the Deputy Chief Minister said.

Bengaluru's civic body has sought the support of people for the procurement of oxygen concentraters and cylinders to plug the gap in supply.'

"We seek your support as we aim to upgrade the public health infrastructure and manage them," wrote Bruhat Bengaluru Mahanagar Palike Commissioner Gaurav Gupta on Twitter.

A steep rise in cases in B'luru has resulted in increased hospitalisation of #Covid patients. We seek your support as we aim to upgrade the public health infrastructure & manage them. Immensely grateful for your support in this effort till now. #WeShallFightCovid19#StayStrongpic.twitter.com/MkMTtyJLDG

Chief minister BS Yediyurappa met oxygen manufacturers and suppliers on Monday to ensure that Karnataka gets the oxygen it has been allocated by the Centre. Among the logistical details discussed were reducing the time taken to refill oxygen tankers, providing green corridors for faster movement of oxygen tankers and to convert and use nitrogen and argon tankers to supply oxygen.

Karnataka saw over 44,000 new COVID-19 cases added to its tally in the latest data with more than 22,000 in Bengaluru alone. The IT city's hospitals have been stretched to bursting point with most having not a single ICU bed available.

There is a centralised number for bed allotment for government quota beds and a dashboard to show their availability. Private hospitals are also expected to come out with a dashboard soon. But patients and their families are still making runs to many hospitals in desperate searches for oxygenated beds and social media is flooded with these appeals.