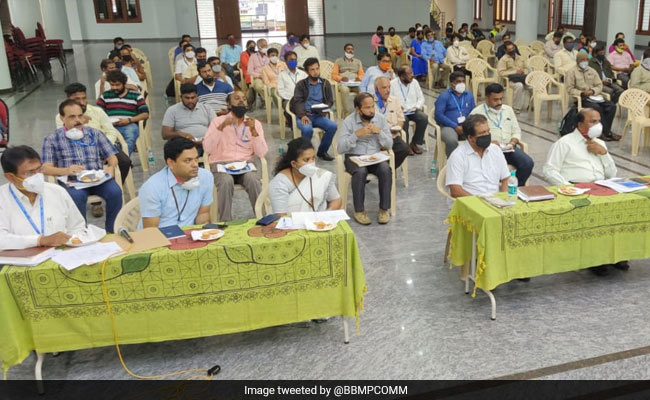 A 28-year-old sanitation worker in Bengaluru has died after testing positive for coronavirus and her trade union has alleged negligence in her treatment.

Shilpa was working as a sanitation worker, also known as pourakarmika, with the municipal corporation Bruhat Bengaluru Mahanagar Palike (BBMP) in the city.

The frontline worker was admitted to the Ambedkar hospital in Bengaluru after she fell ill and tested positive for coronavirus. She died on Thursday.

Bengaluru mayor Goutham Kumar said Rs 10 lakh has been given to the woman's family as compensation. He said compensation would also be provided to four other pourakarmikas who died due to coronavirus.

He said on Twitter: "This week there has been a lot of sadness at BBMP as we lost some of our staff due to COVID-19. Met Dasarahalli and Yelahanka zone officers and staff today to boost their morale. This is the time for all of us to stand together as Bengaluru citizens are expecting a lot from BBMP."

The trade union AICCTU Karnataka has alleged that the sanitation worker was not given proper treatment. The union has called for a candlelight vigil this evening, asking people to post pictures with a candle  on social media sites demanding action in the woman's death due to coronavirus.

"Negligence of casteist BBMP cost Ms Shilpa, a Powrakarmika, her life! We submitted letters, held placards, petitioned BBMP for PPEs, for testing but they weren't moved. Join in a candlelight vigil at 7pm to demand action," it tweeted.

We submitted letters, held placards, petitioned BBMP for PPEs, for testing but they weren't moved.

Pourakarmikas are considered frontline workers during the ongoing coronavirus pandemic as they are out working and cleaning the city streets even during lockdown. Many have tested positive for COVID-19 and there have been complaints that they were not given adequate safety gear. Sanitation workers have also staged protests demanding personal protective equipment (PPEs), medical check-ups and medical insurance.

ASHA health workers of Karnataka have also protested in the past and submitted a memoranda to the state government demanding better facilities during the pandemic.