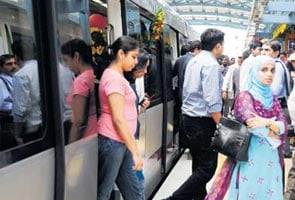 Like every year, Bangaloreans thronged to MG Road andBrigade Road to ring in the New Year. But unlike every year, this year, themetro added glitz to the year-end celebrations.

Joining thousands of youngsters who thronged to M G Road andBrigade Road to say good bye to 2011 and welcome 2012, were families, includingchildren and senior citizens this year, who came to ride the metro.