Bangalore fire: Remembering the victims and honouring the valiant 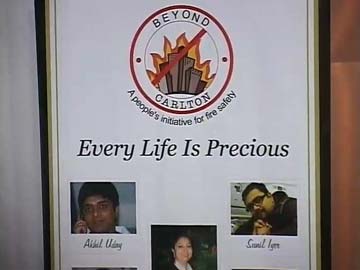 Bangalore: Sunday marked four years to the day since the fire in Carlton Towers in Bangalore that claimed nine lives. Each year, to mark the anniversary, a memorial event is organized by the group, Beyond Carlton, set up by family members of the victims of the horrific blaze to increase awareness about fire safety issues.

Uday Vijayan, who lost his son in the fire, told NDTV that the event, this year, would focus on accountability of those responsible for fire safety in buildings. Mr Vijayan said the group had been working with authorities to get more attention paid to fire safety issues, but that a real change in attitude would take a very long time.

Rajya Sabha MP Rajeev Chandrashekar, who gave this year's memorial address, told NDTV that it was sad that it was often left to family members to bring focus to such issues, rather than civil society taking up the responsibility.

Four firemen were honoured at the event this year, as part of an annual practice: Ramaiah, whose lungs were damaged after inhaling smoke; HS Ramabadraiah, who fought a fire in Jayanagar market; GH Nagaraju, whose vision was blurred due to damage from smoke; and Anil Kumar, who helped save people from a wall collapse and extricated bodies from a building which had collapsed.