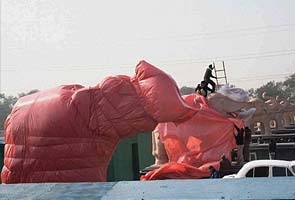 "Though a written report is yet to be received, the district electoral officers of the two districts have verbally communicated that Election Commission's order has been complied with," Chief Electoral Officer Umesh Sinha told reporters.

The EC had on Saturday issued orders to cover all statues of Mayawati and the BSP poll symbol at various parks and memorials in Lucknow and Gautam Buddha Nagar (Noida).

While fixing January 11 as the deadline, the EC had asked the District Electoral Officers-cum-district magistrates of the two places to send a compliance report.

In Lucknow, statues of elephants were veiled with tarpaulin and cloth, while those of Mayawati were covered by wooden structures using plywood sheets at a number of places including DR Bhimrao Ambedkar Samajik Parivartan Sthal, Samajik Parivartan Prateek Sthal and Smriti Upvan.

Promoted
Listen to the latest songs, only on JioSaavn.com
In Greater Noida, statues of Mayawati and elephants were draped on Monday and the exercise was carried out at a number of places, including two parks in Badalpur village and Gautam Buddha University, a senior official said.

In all, 36 statues of elephant and two of the chief minister have been covered in Greater Noida, District
Magistrate (Gautam Buddha Nagar), Hridesh Kumar said.