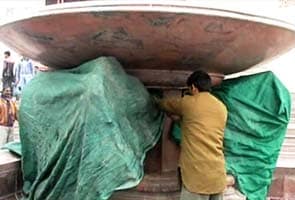 Lucknow: A day after the Uttar Pradesh government complied with the Election Commission's deadline to cover all statues of Chief Minister Mayawati and her party's election symbol, the elephant, the Bahujan Samaj Party has hit out at the poll panel saying the decision was one-sided and had hurt the sentiments of the downtrodden.

In a letter to Chief Election Commissioner SY Quraishi, senior party leader Satish Chandra Mishra questioned the commission's intention to conduct free and fair elections in the state, which will see voting over seven phases in February. He claimed that the decision was unjustified and was a violation of Article 14 of the Constitution.

The commission had not taken into account the statues and election symbols of other parties, Mr Mishra pointed out and claimed that the order was not in conformity with the law. He said that the Dalits and backwards were feeling cheated due to the decision which was based on representations from the Samajwadi Party, the Congress and the Bharatiya Janata Party.

The EC had on Saturday issued an order to cover all statues of Mayawati and the BSP poll symbol at parks and memorials in Lucknow and Gautam Buddha Nagar (Noida) to ensure a level playing field. Fixing January 11 as the deadline, the EC had asked the District Electoral Officers-cum-district magistrates of the two places to send a compliance report.

But Mr Mishra said, "The statues installed in parks and memorials are in welcome position with upside trunk and the BSP symbol elephant has down trunk, which did not violate model code of conduct.

The elephants, one installed in parks and memorials and the party symbol do not have any similarity", he claimed, adding the statues of the elephant are installed in a number of temples and government buildings.

He pointed out that elephants were engraved on the pillars at Rashtrapati Bhawan, North Block and South Block and added that even the Speaker's chair in Parliament had an elephant statue above it.

If the commission had an objection to the BSP's elephant, it should also have acted against the SP's election symbol bicycle, the BJP's lotus and the Rashtriya Lok Dal's handpump, Mr Mishra argued in the letter.

After the EC's order, statues of elephants in Lucknow were veiled with tarpaulin and cloth, while those of Ms Mayawati were covered by wooden structures using plywood sheets at a number of places including Dr Bhimrao Ambedkar Samajik Parivartan Sthal, Samajik Parivartan Prateek Sthal and Smriti Upvan.

The EC order was welcomed by the opposition parties in Uttar Pradesh but some had questioned the utility of such a move.

Justifying the decision, Mr Quraishi had told NDTV that this was being done to ensure  a level playing field since government property cannot be used for political gain.

Promoted
Listen to the latest songs, only on JioSaavn.com
Pointing out that there was nothing unusual in the decision, he said that those criticising the order were ill-informed.