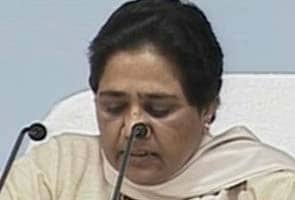 Lucknow: In yet another clean-up act ahead of the Assembly elections in 2012, Uttar Pradesh Chief Minister Mayawati sacked four more ministers, who are facing corruption charges and have public complaints against them. The total number of ministers who have been sacked by Mayawati after the election dates were announced by the Election Commission has now reached 15.

Mayawati said that the ministers would not be fielded in the upcoming assembly elections.

In addition to the corruption charges and public complaints, Mayawati's office reportedly felt they ignored their ministries and partymen in their constituencies.

Promoted
Listen to the latest songs, only on JioSaavn.com
Uttar Pradesh will witness seven phases of polling from February 4 to February 28.

In the run up to the polls, the Uttar Pradesh chief minister has been targeted continuously by Congress' Rahul Gandhi over the issue of corruption.