After Decorated Official, Husband Arrested For Bribery In Telangana

Nunavath Venkateshwara Naik is the husband of Lavanya, a revenue officer who was arrested on July 12 for demanding a bribe of Rs 8 lakh from a farmer. 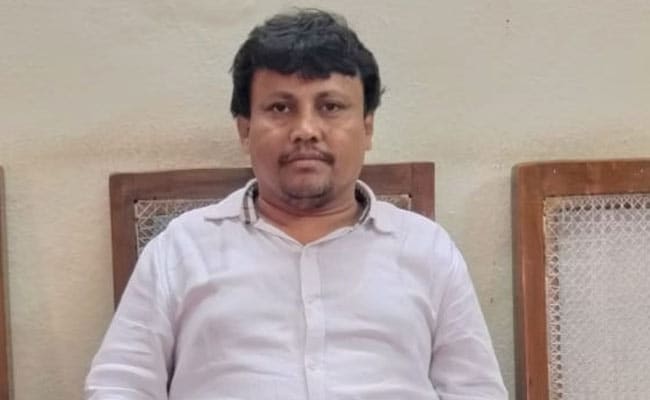 Nunavath Venkateshwara Naik has been taken into custody.

Less than two months after a decorated Telangana official was arrested on charges of possessing disproportionate income, her husband has also been taken into custody in a bribery case.

Nunavath Venkateshwara Naik, who works as a superintendent in the office of the Regional Director, Hyderabad Municipal Administration, has been arrested for allegedly demanding a bribe of Rs 2.5 lakh from the complainant, Vangala Randheer, in return for appointing him as an outsourcing employee in his office. The money was supposed to be routed through a middleman, Kandukuri Prakash.

The official allegedly demanded another Rs 40,000 as a bribe from the complainant in return for "influencing superiors" to ensure that he continues in the post with regular pay as well as insurance and provident fund benefits.

Nunavath Naik's wife Lavanya was arrested on July 12 after Telangana's Anti-Corruption Bureau (ACB) recovered cash amounting to Rs 93.5 lakh and 400 grams of gold from her home in Hyderabad's Hayathnagar. This came two years after Lavanya, a revenue officer in Ranga Reddy district, was named as Telangana's "best tehsildar" at an official ceremony.

The raids were ordered after a village revenue officer, Antaiah, was caught taking a bribe of Rs 4 lakh from a farmer in return for correcting land records. The farmer was allegedly told to pay Rs 8 lakh, of which Rs 5 lakh was supposed to go to Lavanya and the rest to Antaiah, her subordinate.

Although the farmer -- identified as Bhaskar -- had earlier paid the village revenue officer a sum of Rs 30,000 to get his passbook, he approached the ACB when an additional demand of Rs 8 lakh was made for carrying out online corrections. ACB officials arranged for the money, and after Antaiah had accepted it, they detained Lavanya.

An ACB team raided Lavanya's home after she insisted that she had nothing to do with the bribe. Her fall from grace was complete when investigators found nine "pattadar" passbooks in her vehicle, besides documents related to around 45 private properties. Suspicions arose that she may have been holding on to land record passbooks of farmers and demanding bribes for returning them.

Meanwhile, a video of a farmer falling at Lavanya's feet to correct his land records has been widely circulated on the Internet.

Reports of corruption in the revenue department have surfaced from time and again. In March, a farmer posted a video addressed to Chief Minister K Chandrasekhar Rao about the alleged harassment he was facing at the hands of revenue officials in Mancherial. Mr Rao has now promised to bring in a new legislation aimed at eliminating corruption in the revenue department.