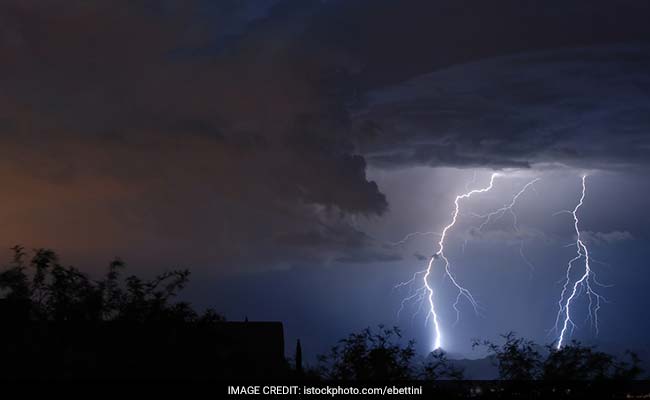 Nellore recorded the highest number of lightning strikes at 11,955 (Representational)

Amaravati: As many as 14 people were killed in 41,025 lightning strikes in different districts of Andhra Pradesh, the state Disaster Management Department said today.

On Tuesday, Guntur district recorded the highest number of deaths at six, followed by Vizianagaram at 3, West Godavari at 2 and Srikakulam, Visakhapatnam and East Godavari at one each, a release from the department said.

Cloud-to-ground strikes happened in 11 out of 13 districts till 11.40 pm on May 1, the release said, citing reports from Earth Networks, which operates weather and climate sensor networks worldwide.

"Owing to sudden change in weather, heavy rain and strong gales occurred in the Bay of Bengal. That had caused the lightning strikes and loss of lives," it added.

Due to whirlpool formation, two fishermen were reportedly drowned in the sea, it said.

The state Marine Police and the Coast Guard were continuing the operation to trace the bodies.

(This story has not been edited by NDTV staff and is auto-generated from a syndicated feed.)
Comments
Disaster Management DepartmentLightning Strikes Andhra PradeshLightning Strikes