Amid Protest, Chemical Firm Sorry For Leak That Killed 11 At Andhra Plant

A protest broke out outside the plant of the Indian arm of a South Korean chemical major in Andhra Pradesh's Visakhapatnam, two days after a gas leak killed 11 and affected at least a thousand people. A tank used to store chemicals for making a wide variety of plastic products leaked into the air at the plant of LG Polymers India Pvt Ltd on Thursday.

The protesters at village RR Venkatapuram near the LG Polymers plant barged into the facility while Director General of Police DG Sawang was inspecting the plant and speaking with the management.

They placed the bodies of two people who died due to the gas leak in front of the factory's gate. The bodies were taken out of an ambulance that was coming from KGH Hospital in Visakhapatnam after post-mortem.

The mother of a nine-year-old who died in the gas leak and whose birthday was coming soon scaled the wall of the chemical plant and confronted the police chief. She fell on his feet demanding justice, according to eyewitnesses.

The police managed to break the protest and took some protesters into custody. 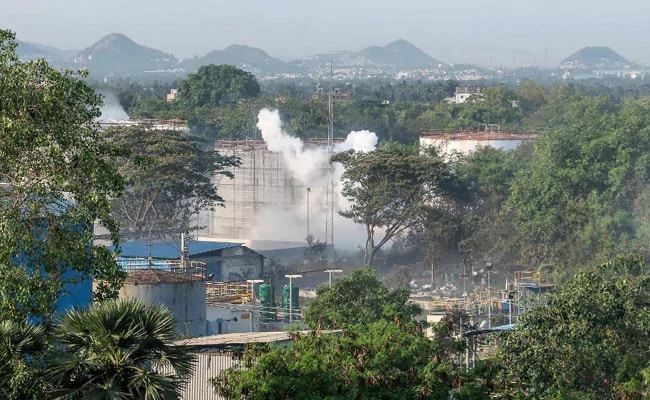 LG Polymers in a statement today apologised for the gas leak. "At the onset, LG Polymers India would like to express sincere condolences and apologies to all who have been affected by this incident. We would like to assure everyone that the company is committed to work closely with the concerned authorities in India to investigate the cause of this incident, prevent recurrence in the future, and secure the foundation for care and treatment," the company owned by South Korea's LG Chem Ltd said in a statement today.

The company said vapour leaked from a tank containing the chemical styrene, a raw material for polystyrene, which is used in products such as food packaging.

"We are happy to confirm that the status-quo at the plant is brought under control this morning... We are doing our best to extend all the possible support to ensure people and their families who have been affected by this incident are taken care of… Our teams are working day and night with the government to… create concrete measures to deliver an effective care package that can be implemented immediately," LG Polymers said.

It said a special task force has been set up and the families of those who died and affected by the chemical leak will be contacted soon.

Styrene is a colourless liquid with a sweet smell. Acute exposure to styrene in humans results in mucous membrane and eye irritation, and gastrointestinal effects, according to the US Environmental Protection Agency (EPA).

The National Green Tribunal on Friday told LG Polymers to pay a fine of Rs 50 crore. "There appears to be a failure to comply with rules and other statutory provisions," the country's top court on environment issues said in its order.

LG Polymers had declared in an affidavit filed for expansion of the plant that they did not have environmental clearance certificate when production started at the unit. That is because the company that began as Hindustan Polymers in the 1960s was later taken over by LG Chem, and started production before the notification for the environment impact assessment was issued by the centre. At that time, there was no population around the plant. But subsequently, settlements came up.