The bottles had been hidden under the legs of two persons in the vehicle, and in the toolbox too, police said. 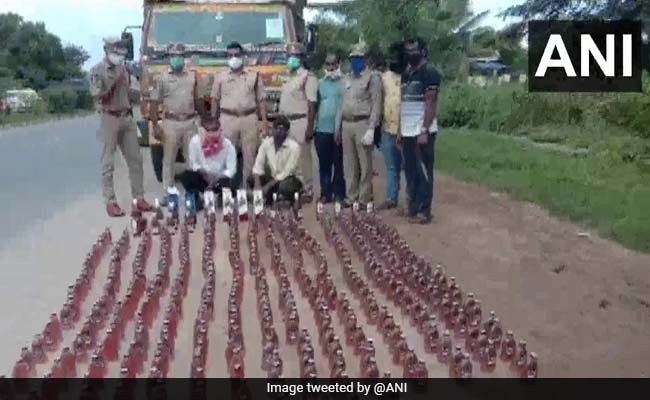 Most of them are quarter bottles and are of premium brands, police said

Two people were arrested in Andhra Pradesh on Tuesday evening for illegally transporting 423 liquor bottles from Telangana to Andhra Pradesh.

The Kanchikacherla police caught the cache while it was being transported from Telangana's Khammam to Vijayawada in Andhra Pradesh.

"Kanchikacharla Sub Inspector Ranganath, Highway Mobile Sub Inspector Koteswara Rao and their team were checking vehicles at Donabanda. They found liquor bottles in a vehicle (Eicher). The bottles are hidden under the legs of two persons in the vehicle, and in the toolbox too," Mr Murthy told ANI.

"A total of 423 liquor bottles are found. Most of them are quarter bottles and are of premium brands. Two persons were transporting these bottles from Khammam to Vijayawada. They have been arrested. One person, who is in Vijayawada is financing them. We will also arrest him soon," he said.