Jagan Mohan Reddy led his party to a resounding victory in the recent Assembly and Lok Sabha elections.

Jagan Mohan Reddy, who led the YSR congress, to a thumping victory in the assembly elections, took oath as the chief minister of Andhra Pradesh. Mr Reddy took oath of office and secrecy at a grand public function at the IGMC Stadium in nearby Vijayawada, becoming the second chief minister of Andhra Pradesh after its bifurcation. Mr Reddy was administered the oath by Governor ESL Narasimhan at 12:23 pm.

46-year-old Jagan led his party to a resounding victory in the recent Assembly and Lok Sabha elections. The YSR Congress won 151 of the 175 seats in the state Assembly, decimating the TDP headed by N Chandrababu Naidu, who became the first chief minister of the state after it was bifurcated to carve out Telangana five years ago. YSRC won 22 of the 25 Lok Sabha seats.

Only Mr Reddy took oath Thursday and his council of ministers is expected to be sworn in on June 7.

Here are the HIGHLIGHTS of the Jagan Mohan Reddy's swearing-in ceremony:

May 30, 2019 15:01 (IST)
Telangana Chief Minister KC Rao attended the ceremony. "He is a young leader, he has a big responsibility, only with mutual understanding between the two Telugu states the people can be developed. Jagan should continue as the chief minister for 3-4 terms," he said.
May 30, 2019 14:52 (IST)

Congratulations to @ysjagan on taking oath as Andhra Pradesh's Chief Minister. I assure full cooperation from the Centre. We will work together to take Andhra Pradesh to new heights.

Congratulations to Jagan Reddyji on being sworn in as the CM of Andhra Pradesh.

My best wishes to him, his new team of ministers and to all the people of the state.

Congratulations, Y. S Jagan Mohan Reddy @ysjagan on taking oath as the Chief Minister of #AndhraPradesh. My best wishes for a successful tenure. May the state forge ahead under your leadership. @AndhraPradeshCM@YSRCParty 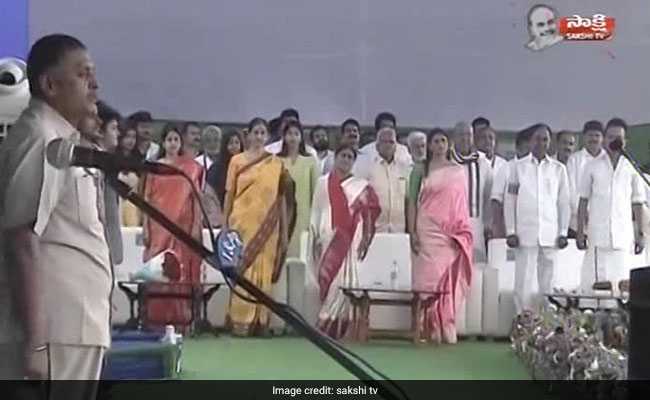 Among the VIPs in attendance were Telangana Chief Minister K Chandrashekar Rao and DMK chief MK Stalin from Tamil Nadu. Mr Reddy and Mr Rao will fly to Delhi for Prime Minister Narendra Modi's swearing-in this evening for a second term.
May 30, 2019 12:41 (IST) 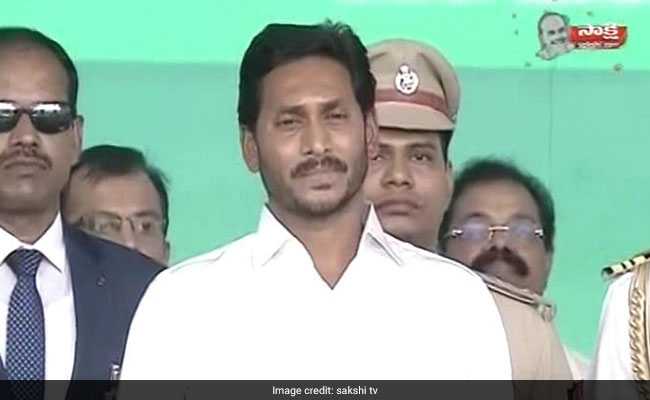 Jagan Mohan Reddy took oath at a grand public function at the IGMC Stadium in nearby Vijayawada
May 30, 2019 12:03 (IST) 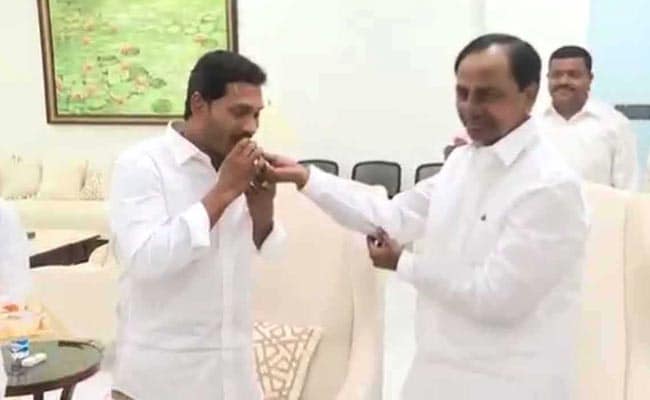 Telangana Chief Minister K Chandrasekhara Rao and DMK president MK Stalin are among the dignitaries who will attend the swearing-in ceremony. The YSR Congress chief has also invited Prime Minister Narendra Modi when he met him Sunday.
May 30, 2019 11:52 (IST)
Jagan Reddy will address specially invited dignitaries through video link
After taking oath, Jagan Mohan Reddy is expected to specially address the invited dignitaries through the video link and present his vision and mission for building a new Andhra Pradesh.
May 30, 2019 11:49 (IST)
For the first time, special arrangements have been made at the Andhra Pradesh Bhavan in New Delhi for live streaming of the swearing-in ceremony.
Ambassadors of various countries, representatives from unilateral and multi-lateral agencies, international donor agencies, industry associations, multinational corporations and international media have been invited to witness the event at the AP Bhavan, according to Resident Commissioner Praveen Prakash.
May 30, 2019 09:58 (IST)
Secunderabad MP Kishan Reddy is likely to get a Union Cabinet berth
May 30, 2019 09:42 (IST)
Venue of Jaganmohan Reddy's swearing-in-ceremony as Andhra Pradesh CM in Vijayawada was damaged due to heavy rain and strong winds.
May 30, 2019 09:13 (IST)

May 30, 2019 08:31 (IST)
Jagan Mohan Reddy alone will take oath today, says sources
Jagan Mohan Reddy alone will take oath on Thursday while his Council of Ministers is likely to be constituted on June 7, party sources said.
May 30, 2019 08:29 (IST)
The YSR Congress won 151 of the 175 seats in the state Assembly, decimating the TDP headed by N Chandrababu Naidu,who became the first chief minister of the state after it was bifurcated to carve out Telangana five years ago. YSRC won 22 of the 25 Lok Sabha seats.
May 30, 2019 08:29 (IST)
Jaganmohan Reddy will take oath as the second Chief Minister of Andhra Pradesh around noon today. Governor ESL Narasimhan will administer the oath of office and secrecy at 12.23 pm in a grand public function atthe IGMC Stadium in nearby Vijayawada.