The man, 38, who has four daughters and one son -- all minors -- allegedly signed a bond months ago, promising to hand over one of his daughters

An auto driver in Andhra Pradesh, who has debt running close to Rs 15 lakh, allegedly tried to sell his minor daughter and wife to pay off the loans.

The man, 38, who has four daughters and one son -- all minors -- allegedly signed a bond months ago, promising to hand over one of his daughters, about 12 years old, once she attains puberty to a man for Rs 1.5 lakh.

"The girl has to be kept safe from any man's eyes till she becomes mature and is handed over," the man's wife listed the conditions set by the buyer to her husband. She says she recently got to know about her husband's plans and fears that all their five children are being traded by him.

The father, reportedly an alcoholic, was also trying to make his wife sign a bond, selling her for Rs 5 lakh to his cousin.

The wife fled to her parents' home in Nandyal in Kurnool district, about 300 km south of Hyderabad and filed a police complaint.

When the district women and child welfare officials reached the couple's house on a tip-off that a child marriage was being planned, the mother told them it was not her eldest daughter, a 17-year-old, who was being readied for marriage, but the second one, who is not even a teenager yet. 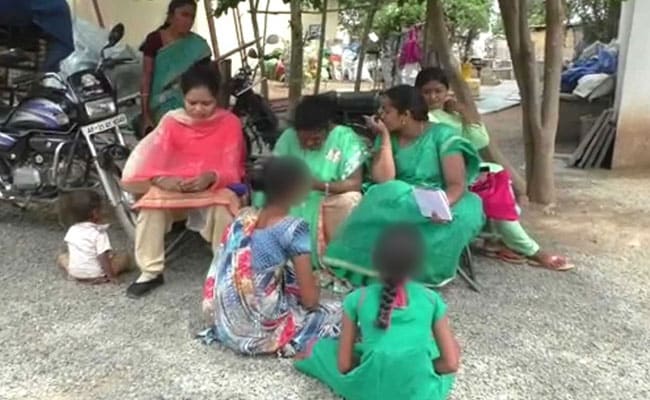 Social workers speak with the woman and her daughter

"My husband says 'it is my wish. I will do what I want with my children', so I am really scared," she added.

The two older children, 17 and 12, have been shifted to a rescue home to ensure their safety.

The woman says she ran away from her home in Koyilakunta along with her children to her parents' house to try and keep them safe, but he followed her there and continued to harass her and the children.

A case has been filed under Section 498A of the Indian Penal Code as though it's a regular case of domestic violence. Sources had earlier said the police are trying to get the couple to an understanding, so no case is filed.

Integrated child development services official, Angela, said they would certainly file a complaint and book cases under relevant sections since these were serious offences. Child protection officer, Saradha, said the case would be examined by the district child welfare committee for further action.