Andhra Pradesh and Telangana Heavy Rains Highlights: People were advised to stay indoors for the next two days as more rains are expected in the state. 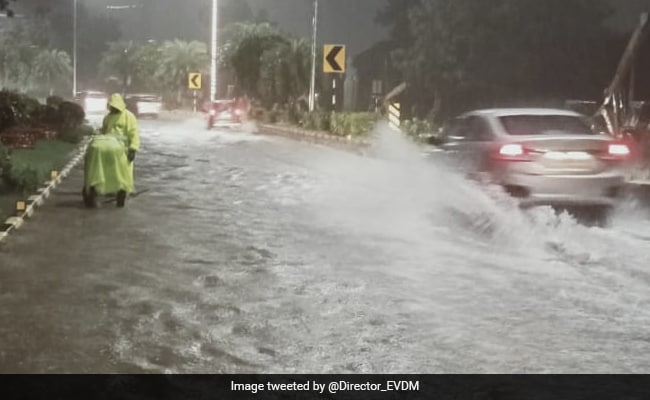 Hyderabad rains: Normal life has been thrown out of gear in Telangana and neighbouring Andhra.

As many as 15 deaths were reported from Hyderabad alone - among those was a two-month-old baby - with water-logging in the city's low-lying areas. Nine others died after a compound wall collapsed and fell on 10 houses during heavy overnight rain.

In horrifying visuals from the capital city's Barkas neighbourhood a man was seen being swept away by the floods. Two people, who managed to find shelter on a nearby elevated path, could be seen watching helplessly as the man was dragged away by the current.

It is not known if the man was rescued safely.

Here are the Highlights on Rain in Andhra Pradesh and Telangana:

Oct 15, 2020 03:14 (IST)
Army joins Telangana government with flood relief, rescue columns in Hyderabad
The Indian Army has joined the Telangana in carrying out rescue operations and flood relief and many stranded people have been shifted to safe places in Hyderabad.

Heavy rains have lashed several parts of the city and the state and normal life has been affected.

"The heavy and incessant rains for the last two days due to depression in Bay of Bengal has resulted in flooding of many residential areas of Hyderabad. Raising to the occasion the Army launched flood relief and rescue columns on 14 October 2020 in Bandlaguda area on requisition by the State Government," a press statement from the Defence Wing of the Government of India read.

"Many stranded people have been evacuated and showing humanitarian values large number of food packets have been distributed. Army Medical teams accompanying the columns are providing essential first aid and medical relief to the stranded people," it said.

A Ravi Kumar, Inspector of Police, Moghalpura Police Station speaking to ANI over the phone said, "An old building beside Akkanna Madanna Mahankali Temple of Haribowli collapsed today. The building was vacant for two and a half years. It collapsed suddenly at around 5:30 PM on Wednesday. No casualties have been reported."
Oct 14, 2020 23:58 (IST)

On Camera, Hyderabad Woman's Narrow Escape As Building Collapses
A woman in Hyderabad's Moghalpura suburb came within inches of being buried alive today, after a decrepit building nearly collapsed on top of her as she was walking past.
In chilling visuals of the incident - sourced from a CCTV feed in the area - the woman, dressed in a black burqa, can be seen walking down the side of a busy road.
As she crosses a temple and proceeds about halfway past the building next door - a two-storey structure that appears abandoned and the facade of which is propped up with wooden sticks and dried palm leaves - it begins to crumble and then suddenly collapses.
Oct 14, 2020 23:47 (IST)
MoS Home G Kishan Reddy visited rain-affected areas in Hyderabad

He says, "Appeal to people to remain indoors for the next 1-2 days, due to heavy rainfall. National Disaster Response Force and Army teams are conducting rescue operations." pic.twitter.com/g1iqb1ZSXo

In Pics: Heavy Rains In Hyderabad Cause Flooding, Rescue Ops On
Fifteen people have died in Hyderabad in rain-related incidents, following incessant rainfall that lashed the city and different parts of Telangana, leading to waterlogging on roads and inundation of some low-lying areas.
People were advised to stay indoors for the next two days as more rains are expected in the state.
The Telangana government has declared a holiday on Wednesday and Thursday for all private institutions, offices, non- essential services within Outer Ring Road here in view of rains.
Oct 14, 2020 22:15 (IST)
Andhra Pradesh Chief Minister Jagan Mohan Reddy held a review of the flood situation and heavy rains in the state

Andhra Pradesh Chief Minister Jagan Mohan Reddy held a review of the flood situation and heavy rains in the state, during a video conference with all district collectors today pic.twitter.com/u91iCwWGv9

Oct 14, 2020 20:46 (IST)
PM Modi called on Andhra Pradesh CM YS Jaganmohan Reddy. He inquired about the heavy rains in the state & the situation after the rains. CM briefed PM about rain-affected areas. CM explained the measures the officials are taking to help the affected people: CMO, Andhra Pradesh
Oct 14, 2020 19:05 (IST)

Oct 14, 2020 16:30 (IST)
Telangana: Total 15 people have lost their lives in Hyderabad due to incessant downpour, since last night.
Out of 15, three people died after wall of a house collapsed in Gaganpahad area of Shamshabad in Hyderabad last night, owing to heavy rainfall.
Oct 14, 2020 16:17 (IST)
NDRF teams have rescued 74 persons till now in Bandangpet area: Satya Pradhan, Director General of NDRF

Oct 14, 2020 15:53 (IST)
Depression over Telangana moved westwards with a speed of 20 kmph during past 6 hours and lay centered at 1130 hrs today, over north interior Karnataka & adjoining areas of Maharashtra, about 40 km north of Gulbarga & about 110 km east of Sholapur: India Meteorological Department 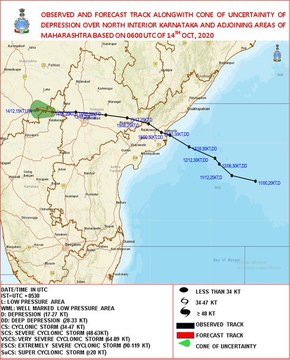 Oct 14, 2020 15:20 (IST)
Telangana government declares two-day holiday for schools, offices
The Telangana government has declared holidays on Wednesday and Thursday for all private institutions, offices and non-essential services.
"Telangana government declares holiday for today and tomorrow for all private institutions/ offices/non-essential services with work-from-home advisory. People advised to stay indoors unless there is an emergency," the Telangana government said in its order.
Oct 14, 2020 14:54 (IST)
Heavy rain have disrupted the normal lives of people following waterlogging in various parts of the state since Tuesday evening. The State Disaster Response and Fire Services Department are carrying out rescue operations in the Toli Chowki area in Hyderabad which was critically affected due to flooding following the downpour, while Vanasthalipuram, Dammaiguda, Attapur Main Road, and Musheerabad areas of Hyderabad were also severely waterlogged due to incessant rainfall.
Oct 14, 2020 14:17 (IST)

#HyderabadRains
In view of the unprecedented rains, several low lying areas are inundated with flood water.

Oct 14, 2020 13:55 (IST)
Telangana rain: Officials directed to remain on high alert
Telangana Chief Secretary Somesh Kumar has instructed the officials of all district administrations to remain on high alert.
Police teams and personnel of Disaster Response Force (DRF) of GHMC and NDRF evacuated several families from different localities that were flooded, even as rescue efforts were on in many other areas.
The GHMC Mayor, Deputy Mayor, MLAs, and other elected representatives and officials have been ordered to be available in the field and continuously monitor and coordinate relief measures.
Oct 14, 2020 13:27 (IST)
The weather department, in its forecast -- valid from 8.30 am on October 14 till 8.30 am on October 15, has predicted heavy to very heavy rain at isolated places over Telangana.
Oct 14, 2020 13:03 (IST)

Watch | Cars were seen piling up in the rampaging floodwater in Hyderabad, one of the worst affected districts in Telangana that has been witnessing heavy rain for the last three days #TelanganaRainspic.twitter.com/20uU22XvrZ

Hyderabad Rain: Caught On Camera: Man Washed Away In Hyderabad As Locals Shout For Help
A man is seen being swept away by the rampaging floodwater in a dramatic visual that has emerged from Hyderabad, one of the worst affected districts in Telangana that has been witnessing heavy rain for the last three days. It is not clear whether the man has been rescued."
Oct 14, 2020 11:48 (IST)

In view of incessant rains, state govt has declared a holiday today & tomorrow for all private institutions /offices / non essential services within ORR with work from Home advisory! 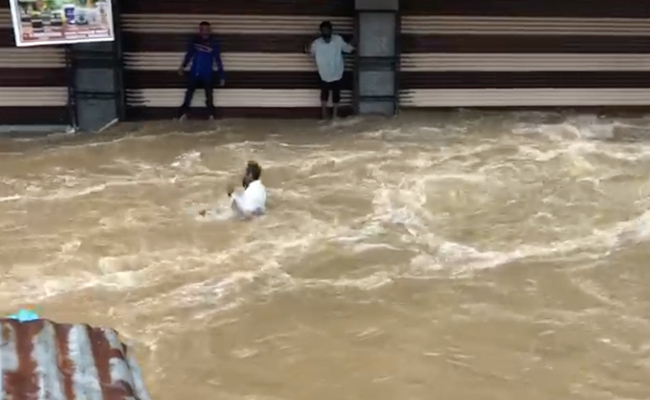 A man is seen being swept away by the rampaging floodwater in a dramatic visual that has emerged from Hyderabad, one of the worst affected districts in Telangana that has been witnessing heavy rain for the last three days. It is not clear whether the man has been rescued.

In the dramatic video shot in Barkas, near Falaknuma, the man is seen being swept away by the strong currents of the rainwater as efforts are made to save him. The man tries to grab hold of a pole that comes in the path but fails as he is pushed by the strong currents. Two people standing at an elevated path are seen watching helplessly amid screams by locals who try to save the man. A tyre tube -- possibly thrown to save him from drowning -- is seen floating with him.

Several areas in Hyderabad, which is among the 14 districts affected in Telangana, have received 20 cm rains in the last 24 hours.

This one is said to be from Osmangunj Afzalgunj PS limits; with incessant rains, city is flooded; many areas in #Hyderabad have received over 20 cm rains in 24 hours #HyderabadRains#IsRaatKiSubahNahin@ndtv@ndtvindiapic.twitter.com/By4pPJYrjU 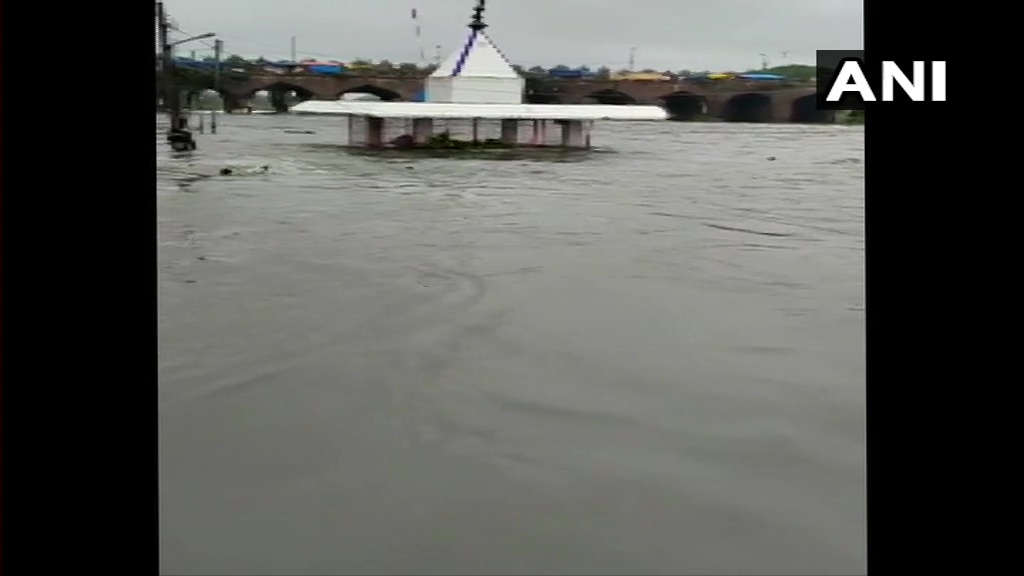 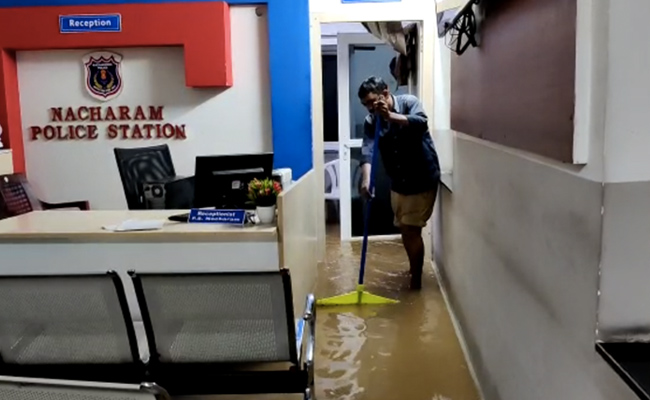 Unbelievable scenes as cars, even heavy vehicles, are like free floating objects just carried by the force of water; this one recd as a forward, said to be from Green Park Colony #Saroornagar#HyderabadRains@ndtv@ndtvindia#FloatingInHyderabadpic.twitter.com/Go4dBVmGaT

Oct 14, 2020 08:17 (IST)
Andhra Pradesh rain live updates: 11.5 cm to 24 cm rainfall recorded at more than 100 places in state
Heavy rain - from 11.5 cm to 24 cm - was recorded at more than 100 places in the state, primarily in East and West Godavari, Srikakulam, Vizianagaram, Visakhapatnam and Krishna districts.
Thousands of acres of farmlands have also been flooded, news agency ANI reported. A video shared online by the agency showed dozens of people hanging on to a rope as they try to cross a heavily flooded road, which looks more like a river in full flow.
Oct 14, 2020 08:08 (IST)
Nine persons died when a boundary wall collapsed due to the heavy rain: Asaduddin Owaisi
Hyderabad Lok Sabha MP Asaduddin Owaisi tweeted:
"HyderabadRains, I was at a spot inspection in Mohammedia Hills, Bandlaguda where a private boundary wall fell resulting in death of 9 people & injuring 2. On my from there, I gave a lift to stranded bus passengers in Shamshabad, now I''m on my way to Talabkatta & Yesrab Nagar," he tweeted.

#HyderabadRains I was at a spot inspection in Mohammedia Hills, Bandlaguda where a private boundary wall fell resulting in death of 9 people & injuring 2. On my from there, I gave a lift to stranded bus passengers in Shamshabad, now I'm on my way to Talabkatta & Yesrab Nagar... pic.twitter.com/EVQCBdNTvB

Oct 14, 2020 08:06 (IST)
Nine persons died when a boundary wall collapsed in Mohammedia Hills in Bandlaguda due to the heavy rain, Hyderabad Lok Sabha MP Asaduddin Owaisi tweeted on Wednesday.
Oct 14, 2020 08:06 (IST)
At least 11 people, including a 2-month-old baby, have died in rain-related incidents in Telangana that has witnessed heavy rain since last two days, leading to waterlogging on roads and inundation of some low-lying areas.
TelanganaAndhra PradeshHeavy rains

30 Rain-Related Deaths In Telangana, Including 15 In Hyderabad