All were rescued and ten lorries pulled out to safety in an operation involving the personnel of the national and state disaster response forces, fire service and police 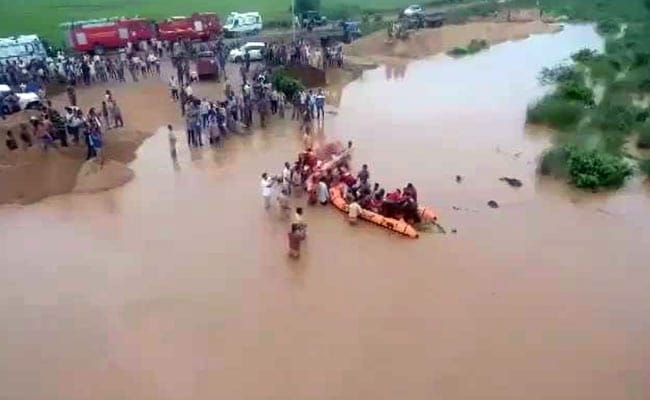 Though the rescue teams reached near the spot around 3.30 am

A group of 53 people engaged in sand mining got trapped in flood waters in a river following opening of a barrage in Srikakulam district and were rescued today after spending nightmarish hours perched atop lorries, the police said.

All were rescued and ten lorries pulled out to safety in an operation involving the personnel of the national and state disaster response forces, fire service and police, and using drones to locate the marooned, they said.

The workers and drivers of the ten lorries from here had gone to the sand reach in Vamsadhara River near Purushottapuram area last night for loading sand when the water was below knee level.

They were caught unawares as water was released from nearby Gotta Barrage following heavy inflows in view of rains in catchment areas in Odisha.

Srikakulam Superintendent of Police CM Trivikrama Varma said irrigation officials released 30,000 cusecs of water from the barrage and the discharge soon led to substantial rise in water level at the spot where the workers were loading sand.

Trapped in rising waters, they managed to climb atop the cabins of the lorries at around 1.30 am today and a few contacted revenue and police officials using mobile phones.

Though the rescue teams reached near the spot around 3.30 am, they waited till day break and set out in boats in the high-flowing river after identifying the exact number of those trapped and their location using drones.

Using two inflatable boats, they rescued all 53 people. The entire operation was successfully executed with coordination of Police, Revenue, Fire and Fisheries department along with the NDRF and SDRF personnel, officials said.