Altogether, 34 people were on the boat, which belonged to a private tourism company. Sources said the boat did not have a licence to operate. One of the rescued persons said there were no life jackets on board.

Several people drowned after a boat capsized in the Krishna River near Vijayawada in Andhra Pradesh.

Hyderabad: A boat overloaded with tourists capsized in the Krishna River in Andhra Pradesh on Sunday evening, resulting in the death of at least 16 people, the police said. The accident took place near Vijaywada, 275 km from Hyderabad, at 5.45 pm.

There were 38 people were on the boat, news agency PTI reported, which belonged to a private tourism company. The incident took place when the boat set off for Pavitra Sangamam at Ferry village near Vijayawada from Bhavani Island, the police said. Fifteen people were rescued by local fishermen.

Police said the boat did not have a licence to operate. One of the rescued persons said there were no life jackets on board. The boatman, who is among the survivors, said no life jackets are needed on this stretch.

Two teams of the National Disaster Response Force, each with 30 members, were called into service to search for the survivors, a senior police officer said. A 45-members team from the State Disaster Relief Forces and the fire service teams were also at work. 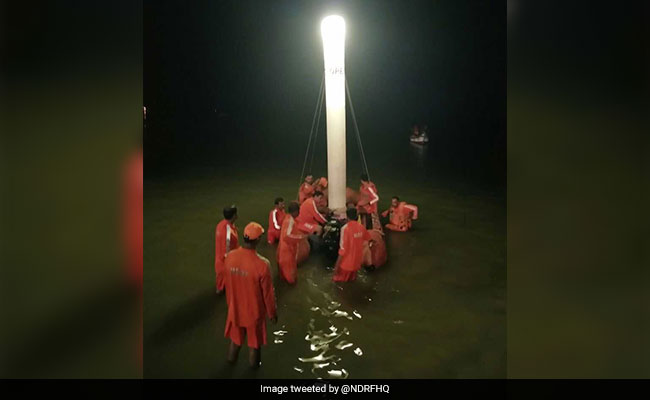 The NDRF was called in to help with the rescue efforts in Andhra Pradesh.

"The boat was overloaded with 38 people and most of them were not provided life jackets. It capsized near a curve as it approached the Pavitra Sangamam point and most of the people were trapped underneath and were killed," an Assistant Commissioner of Police said.

Most of the passengers were said to be members of the Ongole Walkers Club in Prakasam district while some were from Nellore who were on a visit to Vijayawada.

Deputy Chief Minister N Chinarajappa arrived at the spot to oversee the rescue operations and announced a compensation of Rs 5 lakh each for the families of those killed.

Chief Minister Chandrababu Naidu, leader of opposition YS Jaganmohan Reddy and other leaders have expressed grief over the tragedy.

Promoted
Listen to the latest songs, only on JioSaavn.com
Tourism Minister Bhuma Akhila Priya ordered an inquiry into the incident and directed her department officials to find out whether the boat operator had requisite permissions.