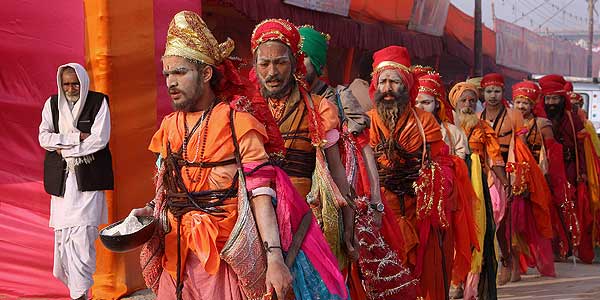 New Delhi: A procession of around 100 million devotees, from naked sprinting gurus to worshippers completing simple rituals, will stream into the river Ganges next week for the world's biggest festival.

The Kumbh Mela starting Monday and stretching over 55 days, attracts ash-covered holy men who run into the frigid waters, a smattering of international celebrities, as well as millions upon millions of ordinary Indians.

Its name translates as the "Pitcher Festival" and every three years it provides a unique spectacle of colour, noise and Hindu religious devotion, particularly on what are deemed to be the most auspicious bathing days.

Worshippers, who believe a dip in the holy waters cleanses them of their sins, have already begun arriving in the host town of Allahabad and millions more are on their way, heading for makeshift accommodation and campsites.

"The biggest challenge for us is to ensure that we are able to provide an opportunity to each and every person to bathe on the auspicious days without any stampede," Devesh Chaturvedi, a top Allahabad administrator, told AFP.

The scale of the organisation required for a festival that was marred by 45 deaths in a crush in 2003, when it was held in the western Indian town of Nasik, is staggering.

Allahabad, at the confluence of the rivers Yamuna and Ganges in northern Uttar Pradesh state, last hosted the festival in 2001 when an estimated 110 million pilgrims passed through without incident.

Organisers are preparing to receive just as many people this time, with an average influx of around two million a day.

"This is also the first time that we are using technology in our security operations," added Chaturvedi. "We have installed closed circuit cameras at strategic locations."
Nearly 7,000 buses and 750 trains are expected to ferry people to and from the main bathing area, where three giant "ghats" have been built enabling visitors to walk down steps into the sacred but heavily polluted water.

Many drink it, while others bottle it and take it home as a memento or a gift for relatives.

Among the visual highlights is the sight of bearded, naked and dreadlocked holy men, or sadhus, running en masse into the water, brandishing tridents, swords and sticks at auspicious times on the important bathing days.

Sadhus are reclusive ascetics or wandering monks who renounce normal life and often live alone in India's remote mountains and forests devoting themselves to meditation, but they emerge to lead the key Kumbh Mela bathing sessions.

Companies along the banks of the Ganges and its tributaries, including the severely polluted Yamuna which flows through New Delhi, have been warned not to violate the routinely flouted pollution rules and reservoirs upstream will be opened in an attempt to dilute the dirty river water.

At the festival site itself, plastic bags have been banned and pilgrims will be asked not to use soap while bathing, as well as refraining from throwing religious waste such as garlands and incense sticks into the river.

This year's celebrity attendees are led by British actress Catherine Zeta-Jones who is reportedly eager to follow in the footsteps of previous festival-goers Madonna, Pierce Brosnan and Sharon Stone.

Kumbh Mela has its origins in Hindu mythology which tells how a few drops from a pitcher containing the nectar of immortality are said to have fallen during a fight between gods and demons on the four locations across India which host the festival -- Allahabad, Nasik, Ujjain and Haridwar.

The only other religious festival to rival the Kumbh Mela in size is the hajj pilgrimage in Saudi Arabia, one of the five pillars of Islam which must be performed at least once in a lifetime by all Muslims who are able to do so.

Promoted
Listen to the latest songs, only on JioSaavn.com
In 2012, it drew 3.1 million people.