Prime Minister Narendra Modi had laid the foundation of the project after inaugurating a 6.5-km stretch of phase I of the project during his visit in March this year. 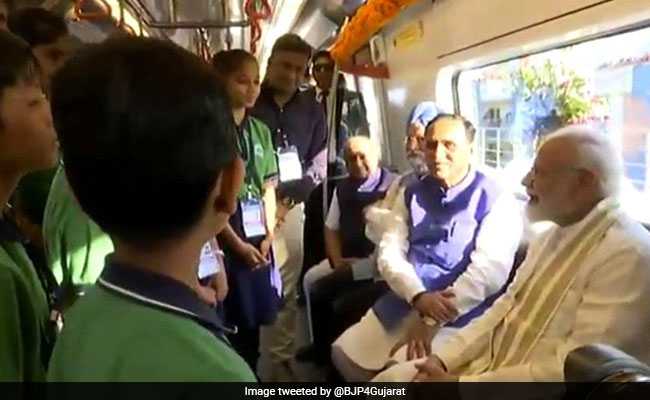 Construction for the phase II of the Metro rail project between Motera in Ahmedabad and Mahatma Mandir in Gandhinagar, covering a distance of 28.2-km, is expected to begin in June 2020 and get over by March 2024, the officials said on Sunday.

The Union Cabinet had in February this year approved phase II of the project connecting the twin cities of Ahmedabad and Gandhinagar.

Chief Minister Vijay Rupani on Sunday chaired a meeting to know the progress of the metro rail project.

During the meeting, Gujarat Metro Rail Corporation (GMRC) Managing Director, SS Rathod, informed him that tenders for extending the metro rail from Motera till Mahatma Mandir will be floated soon, a release issued by the state government said.

Prime Minister Narendra Modi had laid the foundation of the project after inaugurating a 6.5-km stretch of phase I of the project during his visit in March this year.

"Geotechnical investigation work related to the project was undertaken after its foundation-laying ceremony by the prime minister, for which the Centre approved the state's request for Rs 5,384.17 crore fund," the release said.

"Construction work for the project will begin in June 2020 and is expected to be completed by March 2024," it said.

The first phase of the project costs around Rs 10,773 crore, for which Japan has extended a soft loan of Rs 6,066 crore to the Indian government through its funding agency JICA (Japan International Cooperation Agency).

The Gujarat government and the Centre will each contribute Rs 1,990 crore for the project.

Phase I of the project covers a distance of 40.03 km, of which 6.5 km is underground and the rest of the stretch is elevated, and is expected to be fully operational by 2021.

In February 2010, the state government had set up GMRC to implement the project.