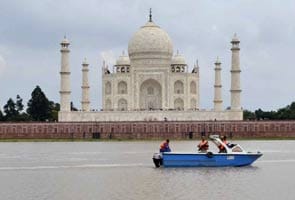 Agra: The 21st edition of the Taj Mahotsava opened on Friday amid engaging cultural performances and talented displays of craft works by artisans.

The cultural performance began with the theme song of the festival followed by Sufi singing and dances depicting 'Brij ki Holi,' Charkula and Mayuri and shehnai players and Rajasthani drummers captivating the audience with their tunes.

A cultural troupe from Lanka was also scheduled to give a show later tonight.

Over three hundred artisans from all over the country have put up stalls to display their craft at the festival, which has the pick of the Indian cuisine available to visitors.

Local, regional and national artistes will be giving performances at the open air stage and at Soor Sadan auditorium among other events.

One of the festival's highlights, the Taj Challenge Car Rally will be flagged off tomorrow and cover a distance of 200 kms while traversing the towns of Shamsabad and Pinaha.

Promoted
Listen to the latest songs, only on JioSaavn.com
The Mahotsava, which had been postponed by nearly a month from its original dates of February 18 to 27 due to the Uttar Pradesh Assembly elections, will carry on till March 26.