The four men managed to get out of the car without any major injuries.

Four friends travelling in an SUV had a miraculous escape after their car fell into a 20-feet deep ditch off the expressway between western Uttar Pradesh's Agra and capital Lucknow. The four men were on a road trip from Mumbai to their home in Kannauj district after one of the men bought the car in Mumbai.

A part of the service road along Agra-Lucknow Expressway caved in this morning after heavy rain, leading to the creation of a ditch. The accident took place in Dauki, about 16 km from Agra. The owner of the car is an auto rickshaw driver and had bought the second-hand vehicle from Mumbai a few days ago.

The men were using Google Maps to navigate since it was their first time on the 302 km-long expressway. They somehow ended up on the service road and did not realise that a portion of the road had caved in. All four managed to get out of the car with the help of locals and did not have any major injuries. 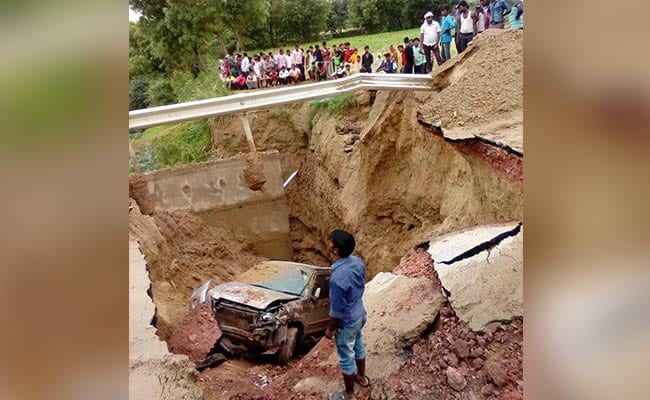 The UP government has asked a third party agency to find out the reason for the cave-in.

Videos shot by locals showed the SUV being pulled up using a crane. The efforts to pull the car up, however, only ended up causing more damage as it fell off the hook, right back into the ditch just as it was brought up.

The Yogi Adityanath government has asked a third-party agency to find out the reason for the cave-in and submit a report within 15 days. "Heavy rain and the accumulation of water have led to the collapse of a 15-20 metre section of a side road on the Agra-Lucknow expressway. Immediate repairs will be undertaken by the agency that constructed the road. The cost will be borne by this company," a government statement said. 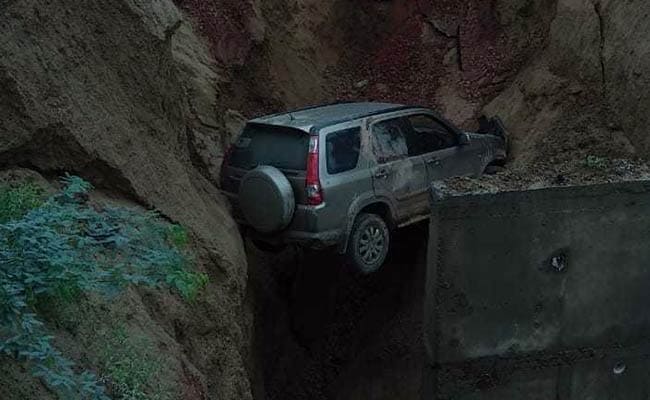 The Uttar Pradesh government said the road cave-in will be repaired immediately.

Work for the ambitious Rs 11526.73 crore Agra-Lucknow Expressway began in January 2015 and it became operational in November 2016. At 302 km, it is the country's longest expressway on which Indian Air Force fighter jets can land and take-off in case of an emergency.

The stretch of road that caved in today was constructed by a public-listed company whose promoters are related to the mayor of Agra.