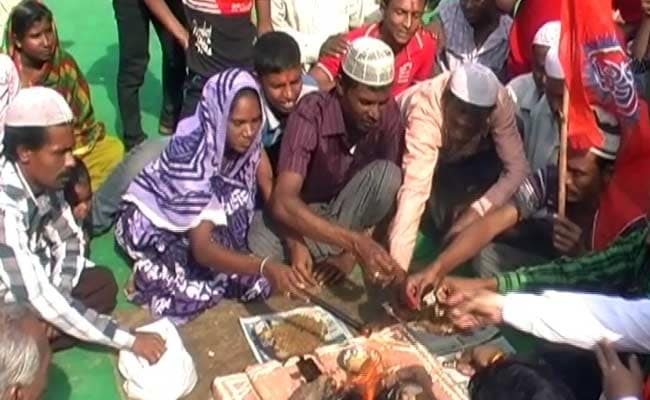 A 'conversion ceremony' at Agra

Agra: A day after a compromise that ended a logjam in Parliament over a hate speech by union minister Niranjan Jyoti, a united opposition forced the government to agree to a debate on "rising communal incidents in the country."

In the debate to be taken up in the Rajya Sabha next Wednesday, the riots in Delhi's Trilokpuri during Diwali, the burning of a church not far from that area recently and a "mass conversion" in Uttar Pradesh on Monday will be raised, say opposition parties.

Many MPs raised concerns in Parliament about the conversion of some 200 people to Hinduism in a ceremony in Agra by groups linked to the BJP's ideological mentor Rashtriya Swayamsevak Sangh.

"These are attempts to disturb the atmosphere in UP with the 2017 assembly polls in mind," said Congress leader Rajiv Shukla.

"Communal forces are behind this and it's not right," said former Uttar Pradesh Chief Minister Mayawati.

Bajrang Dal and Dharam Jagran Manch, the groups that performed the mass conversions, claim that the families were originally Hindu and converted to Islam around 30 years ago.

The ceremony, called "homecoming", saw chanting by priests, after which the converts washed the feet of Hindu idols. Some of the converts picked from a colony of rag-pickers, claimed that they had been lured with incentives like a ration card and other cards that would entitle them to subsidized welfare schemes.

Promoted
Listen to the latest songs, only on JioSaavn.com
Three months ago, a similar event in Aligarh saw Christian families converting to Hinduism.

BJP MP Vinaya Katiyar said, "So many Hindus have converted to Islam or Christianity. If they want to return, then it is their right, their entitlement."