Mugabe, 94, who was ousted by the military in November, made a surprise intervention on election eve, calling voters to throw ZANU-PF out of office. Campaigning has been relatively unrestricted and peaceful this time.

Zimbabweans cast their ballots Monday in the country's first election since authoritarian leader Robert Mugabe was ousted last year, with concerns over fraud and the likelihood of a disputed result clouding voting day.

Long lines formed from early morning outside polling stations in the capital Harare.

"I just have to do this. I have to see a better Zimbabwe for my kids. Things have been tough," Tawanda Petru, 28, an unemployed man voting in Mbare, a low-income district of Harare, told AFP. 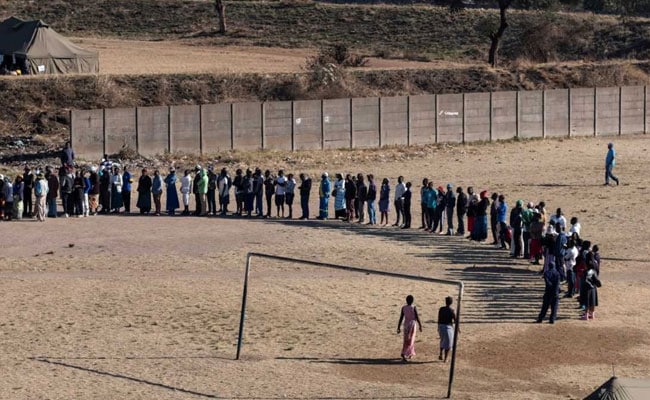 Zimbabweans stand in line for the voting process

"I'm going to vote for Chamisa, for change. I am not afraid, I can tell you."

Mugabe, 94, who was ousted by the military in November, made a surprise intervention on  election eve, calling for voters to throw ZANU-PF out of office.

Zimbabwe's generals shocked the world last year when they seized control and ushered Mnangagwa to power after Mugabe allegedly tried to position his wife Grace to be his successor.

Mnangagwa, 75, who has promised a fresh start for the country despite being from the ZANU-PF elite, is the front-runner with the advantage of covert military support, a loyal state media and a ruling party that controls government resources.

But Chamisa, 40, who has performed strongly on the campaign trail, hopes to tap into a young population that could vote for change. 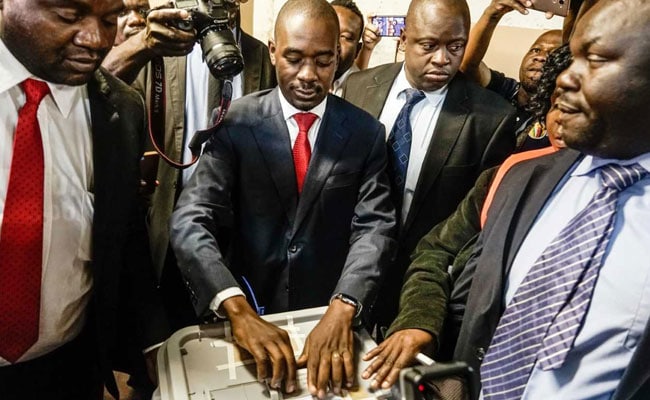 If the ballot is a genuine one, not a fake one, victory is certain: Nelson Chamisa

"I have no doubt that by the end of the day today we should be very clear as to an emphatic voice for change, the new, and the young -- I represent that," Chamisa said as he voted in Harare.

He again raised fraud allegations, saying "in the rural areas... if the ballot is a genuine one, not a fake one, victory is certain."

The election is Zimbabwe's first without Mugabe, who led ZANU-PF to power in a vote when the country became independent from Britain in 1980 and ruled for 37 years.

Speaking at his mansion on Sunday, Mugabe said he hoped the election would "thrust away the military form of government."

"I cannot vote for those who tormented me," Mugabe said, hinting he could vote for MDC.

As Zimbabwe's hectic politics reached fever pitch, Mnangagwa claimed late on Sunday that Mugabe's remarks proved that Chamisa was in a secret alliance with Mugabe.

Elections under Mugabe were marred by fraud and often deadly violence, and this year's campaign has been dogged by accusations the result will be rigged.

The MDC has raised repeated allegations of a flawed electoral roll, ballot paper malpractice, voter intimidation, bias in the Zimbabwe Electoral Commission (ZEC) and free food handed out by the ruling party.

But campaigning has been relatively unrestricted and peaceful.

"After years of stasis, the events of November 2017 gave Zimbabwe the chance to dream again," Mnangagwa said Sunday in an address on state radio.

"As we have always said, the elections will be free, non-violent and credible."

A recent Afrobarometer survey of 2,400 people put Mnangagwa on 40 percent and Chamisa on 37 percent, with 20 percent undecided. 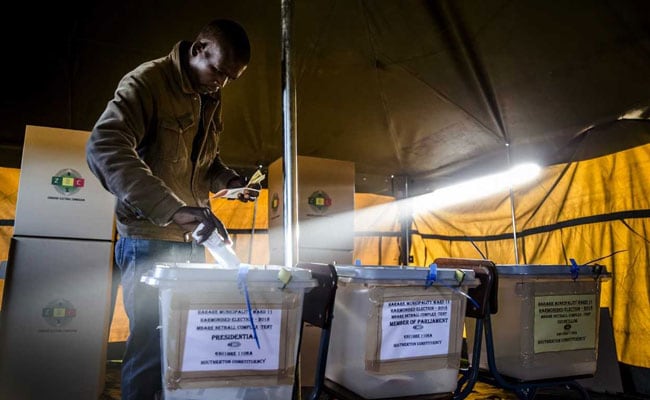 Long lines formed from early morning outside polling stations in the capital Harare.

Mnangagwa, who is accused of involvement in election violence and fraud under Mugabe, invited international observers -- including the previously-banned European Union team -- to the poll.

The EU team will deliver a preliminary report later in the week.

The UN High Commissioner for Human Rights warned of alleged intimidation and threats of violence in the run-up to polling day, but said it was encouraging to see open rallies and peaceful demonstrations.

The next government must tackle mass unemployment and an economy shattered by the Mugabe-backed seizure of white-owned farms, the collapse of agriculture, hyperinflation and an investment exodus.

Previously solid health and education services are in ruins and millions have fled abroad to seek work.

Life expectancy has only just recovered to its 1985 level of 61 years.

"However, there remain serious concerns over vote credibility."

With 5.6 million registered voters, the results of the presidential, parliamentary and local elections are due by August 4.

A run-off vote is scheduled for September 8 if no presidential candidate wins at least 50 percent in the first round.