Zika Has Pregnant Women In The US Worried, And Doctors Have Few Answers 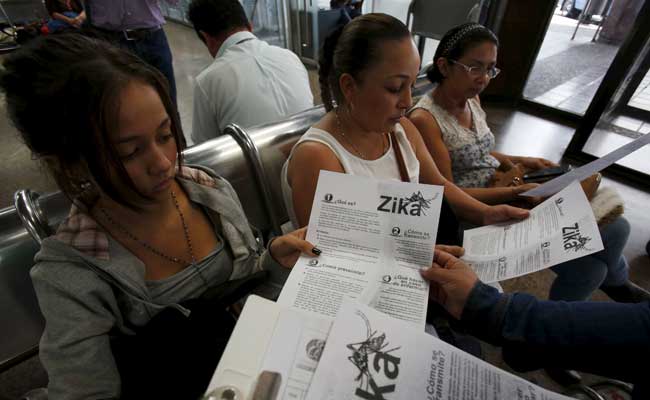 Total reported Zika cases in Columbia increased by 23 per cent over last week's figures, while the number of pregnant women with the virus was up 57.8 per cent. (File photo)

The pregnant woman was in her 30s and, like a growing number of patients at Richard Newman's practice in downtown Washington, worried about a threat the obstetrician himself had learned about only recently: Zika.

In December, during her first trimester, she'd taken a vacation to Central America. Weeks later, U.S. officials began warning pregnant women about traveling to regions where the virus was spreading rapidly. She'd gotten a mosquito bite, followed by a rash, fever and joint pain -- all potential symptoms of infection.

Newman recommended she see a specialist at Sibley Memorial Hospital and encouraged her to have her blood tested by the Centers for Disease Control and Prevention. He'd already done the same for more than a dozen anxious patients in 2016, and each time the results were negative.

This time, the test came back positive.

"We'll obviously have to watch you very closely," Newman told the woman, knowing he'd never encountered a case with such risks in his long career.

Across the country, obstetricians and specialists in high-risk pregnancies are fielding similar concerns and more because of Zika.

Patients are alarmed given recent trips to the countries with growing outbreaks in the Caribbean and Latin America. They want reassurance that they're not infected, that their babies will be safe from the potentially devastating birth defects associated with the virus. Some are even putting fertility treatments on hold.

There's only so much their doctors can tell them since so much about Zika remains unknown. The virus is spread primarily through mosquitoes -- but sexual transmission is also possible and more common than once thought. Detecting an infection can be tricky because as many as 80 percent of people never show symptoms -- but one of the most serious may be a rare paralysis.

Yet pregnant women face the most devastating consequences because of the danger Zika seems to pose to a developing fetus. Many physicians say that they're struggling, often for the first time in their careers, to advise patients on what to do.

Two studies released Friday could further rachet up the worries. Although scientists have yet to determine precisely how the virus is linked to microcephaly, in which babies are born with abnormally small heads and often have severe brain damage, a team of U.S. researchers has discovered how the virus selectively infects cells forming the brain's outer layer. Once it does, the cells are more likely to die and less likely to make new brain cells.

And in Brazil, researchers tracking dozens of infected pregnant women found "grave" fetal complications and birth defects in nearly a third of cases.

At a recent workshop held by the National Academy of Sciences, a leading obstetrician described the kinds of questions she and other doctors have been getting: If a pregnant woman becomes infected, how likely are birth defects for her baby? How do the risks differ by trimester? How often should ultrasounds be performed to look for abnormalities?

"A lot of these questions are unanswerable right now," Newman said. "In most of the things I do, I have 35 years of experience. I've seen it all. I know what to expect, and I can give really good advice. The scariest part for us is that nobody has had any experience with this."

In Florida, where the warm, humid climate is ideal for the mosquitoes that transmit the virus, anxiety among pregnant women has been palpable. The state already has declared a public health emergency in 11 counties because of Zika.

"Because we are so far south, we seem to have more patients traveling to or from these countries than other places in the U.S.," said Loraine Endres, who works at a Fort Myers practice that counsels high-risk pregnant women. "Truthfully, this is one of the most difficult things we have had to deal with just because there's so much uncertainty."

One of her patients, Nina Burt, was 13 weeks pregnant when she visited family in Brazil over Thanksgiving. She got a mosquito bite while there but never saw a rash or any of the other minor telltale symptoms. After the CDC broadened its testing recommendations to include pregnant women without any signs of infection, Burt quickly responded. She's won't know those test results for several more weeks.

So far, ultrasounds show that the baby is developing normally. The 38-year-old mother of two remains cautious but optimistic as her late-May due date approaches.

"The unknown is kind of stressful, [but] it's in God's hands," Burt said.

Laura Riley, director of labor and delivery at Massachusetts General Hospital, is relying on the CDC's guidance and her own knowledge of congenital viruses. But she still finds herself unable to counsel women as she'd like to do. About 50 patients in her practice may have been exposed during holiday travel in the Americas. Five have shown symptoms of the virus.

"You can imagine, I'm sitting in a small room with a couple that wants answers," Riley said.Even if a Zika test comes back negative, she's not sure at what point it is "truly negative" so she can say with confidence that a patient is in the clear.

"Pregnant women go to their doctors and hope their doctors can do a test and make it all better," Riley said. "This is one of those situations where you just don't have enough information to do that."

The CDC is establishing a registry of pregnant women who may be at risk for Zika infections. Of nine pregnant Americans with confirmed infections, at least two recently chose to have abortions, two suffered miscarriages, and one gave birth to an infant with serious birth defects. Two others delivered healthy infants, and two are still pregnant.

At MedStar Washington Hospital Center in the District, Jennifer Ballard has been following about a dozen patients potentially exposed to Zika during recent trips. Two did contract the virus and either gave birth or terminated the pregnancy, she said, declining to provide specifics. The rest are still awaiting test results.

"It's really hard to be in a place to reassure your patients when you don't have information to feel reassured yourself," Ballard acknowledged. "We don't know if, just because we can't see microcephaly, that it doesn't mean there's not something else that could be a problem."

Ami Levy, 35, had vacationed in Argentina in late December. She and her husband spent time in Buenos Aires but also visited Igazu Falls, a popular tourist spot that straddles the Brazilian border. There, she got a bug bite on her arm, followed by a rash, and her eyes became red. The symptoms soon subsided, and she didn't think much more about them.

"No one was talking about Zika. It wasn't on my radar," she said. Only later, after she returned home to Washington and discovered she was pregnant, did she began to fret.

On Jan. 15, Levy flew to Puerto Rico for a long-planned trip with her sister and aunt. Her husband called a few hours later. The CDC had just issued an alert urging pregnant woman to consider postponing travel to 14 countries and territories -- including Puerto Rico. The couple agreed she should catch the next possible flight home. She did, but not before finding multiple mosquito bites on her leg.

Concerned about the two possible exposures, Levy soon saw her doctor and sent a blood sample to the CDC. Two tense weeks passed. Finally, word arrived that she had tested negative.

"I felt very lucky," said Levy, a psychotherapist. "We could breathe a little bit and get excited about the baby, about our family."

The outcome was different for the expectant mother at Newman's practice.

Everything looked fine on the sonogram he'd ordered when she was 16 weeks along. But the image a month later showed distinct abnormalities with "very little brain development," Newman said. A fetal MRI confirmed severe brain atrophy, and analysis of the woman's amniotic fluid detected the presence of Zika.

Newman told his patient that the results suggested her child, if carried to term, might not survive long and almost certainly would have "no chance for a normal quality of life."

Last month, after the final tests results came in, the woman called and told him she planned to terminate the pregnancy.

"I just listened and sympathized," he said. "I can only imagine how hard this was for her. ... It was one of the saddest moments of my medical career."