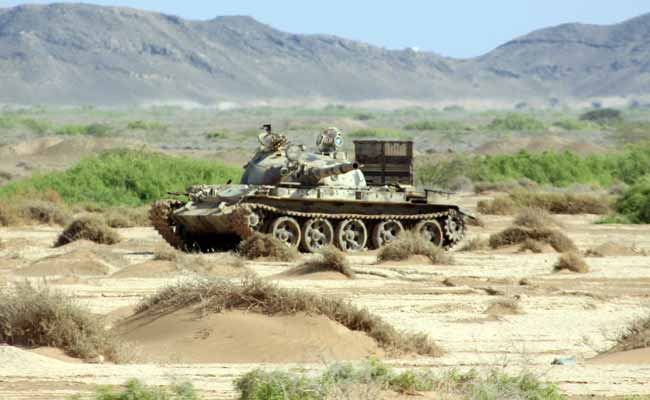 A tank belonging to Yemeni fighters loyal to Yemeni President Abedrabbo Mansour Hadi is seen in the Dabab district in Taez province, on December 13, 2015. (AFP)

Geneva: UN-brokered peace talks between Yemen's internationally recognized government and the country's Shia rebels started today in Switzerland as the guns went quiet across Yemen and air raids from a Saudi-coalition targeting the rebels were halted.

The week-long ceasefire, meant to give the warring factions a chance to find a solution to the conflict that has collapsed the Arab world's poorest country, went into effect at noon today. But only Yemeni government officials were able to confirm it, Shia rebel leaders could not be immediately reached for comment on how the truce was holding.

Yemen has been torn by fighting pitting the rebels, known as Houthis, and army units loyal to former President Ali Abdullah Saleh against an array of forces, including the internationally recognized government, which is backed by the Saudi-led coalition and supported by the United States, and also southern separatists, religious extremists and other militants.

In a statement, UN special envoy for Yemen Ismail Cheikh Ahmed said the talks in Switzerland "should mark the end of military violence in Yemen."

According to the UN, the war in Yemen has so far killed at least 5,878 people since March, when the fighting escalated after the Saudi-led coalition began launching airstrikes targeting the rebels.

Just hours before the ceasefire started, the coalition and pro-government forces seized the Red Sea island of Zuqar from the rebels.

Yemeni security officials, who have remained neutral in the conflict, said both sides had intensified the fighting to solidify their positions ahead of the truce. There was no immediate word on casualties and the officials spoke on condition of anonymity because they were not authorized to speak to reporters.

Past efforts to end the violence have ended in failure, as the government insisted the Houthis comply with a UN resolution that requires them to return seized weapons and territory they had captured over the past year, including the capital, Sanaa. In response, the Houthis demanded negotiations over the country's political future.

The two sides had initially agreed to halt fire at midnight Monday but the coalition delayed the truce to midday today, without elaborating.

In Geneva, UN spokesman Ahmad Fawzi said a total of 24 people were taking part in the "open-ended" talks. UN officials have declined to specify the location of the talks, but Swiss public radio on Monday said they were to take place in the village of Macolin, near the Swiss town of Biel.
Comments
YemenYemen Ceasefirepeace talks in SwitzerlandUnited NationsYemen crisisHouthis