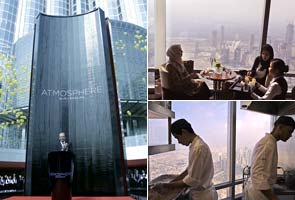 Dubai: The world's highest restaurant situated 442 metres up in the sky on the 122nd floor of the world's tallest building Burj Khalifa here has opened its doors to the public.

However, dining at this height comes for a price.

The restaurant, which is reached by its own private elevator from the tower's corporate suites lobby, can accommodate 210 people over a lounge and grill and offers an unparalleled view of the emirate's skyline.

Those wanting to book the luxury restaurant's private dining area will be expected to fork out at least USD 176.9 per guest, while afternoon tea comes in at nearly USD 100.

For drinks and snacks in the lounge area, guests must spend USD 54.45 per head.

Diners keen to get a booking at the world's highest restaurant may need to save up after the Burj Khalifa eatery revealed patrons will be charged a minimum of USD 122 a head.

"I think it's going to set new standards for Dubai and maybe the world and even give people the opportunity to see something different when they stay in Dubai," Dardenne said, adding that the feedback has been tremendous as a lot of people insisted on being there for the first night.

The restaurant is said to be booked out for its first two days of opening.