World's First Battery-Powered Cruise Ship To Sail For The Arctic

The hybrid expedition cruise ship, the Roald Amundsen, can take 500 passengers and is designed to sail in harsh climate waters. The ship is named after after Norwegian explorer Roald Amundsen.

The world's first cruise ship propelled partially by battery power is set to head out from northern Norway on its maiden voyage, cruise operator Hurtigruten said on Monday.

The hybrid expedition cruise ship, the Roald Amundsen, can take 500 passengers and is designed to sail in harsh climate waters.

While the engines run mainly on marine gasoil, the ship's battery pack enables it to run solely on batteries for around 45 to 60 minutes under ideal conditions, Hurtigruten Chief Executive Daniel Skjeldam told Reuters.

The company estimates that the battery pack will reduce fuel consumption and save about 20% in carbon dioxide emissions, compared to if the ship was operating on marine gasoil alone. 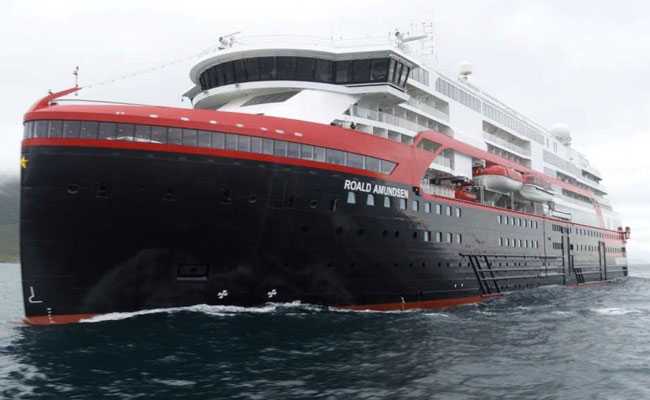 The ship heads for the Arctic this week and will sail the Northwest Passage to Alaska before heading south, reaching Antarctica in October.

"It's designed to take excessive energy from the engines and put into the battery when the ship doesn't need it, and put it back into the engine when the ship needs it -- it is a way of reducing emissions significantly without having charging stations available," Skjeldam said.

The company, which operates scenic cruise lines along the country's fjords and into the Arctic, was inspired by Norway's fleet of hybrid ferries and also its growing fleet of electric cars, he said.

Battery technology for propelling ships is in its infancy, even on shorter routes, as few ports provide charging stations.

"We expect batteries to be an important part of shipping in the years to come, but of course we don't expect our ships to be able to operate only on batteries, because the ship can sail up to 18-20 days in areas where there are no charging points," Skjeldam said.

Hurtigruten expects infrastructure will improve on its traditional routes along the Norwegian coast, while currently charging services are only provided in Bergen, Norway's second-largest city.

He added that the second hybrid cruise ship the company has on order, to be delivered later this year, will have battery pack with twice the capacity of the Roald Amundsen.

(Except for the headline, this story has not been edited by NDTV staff and is published from a syndicated feed.)
Comments
ArcticArctic expedition