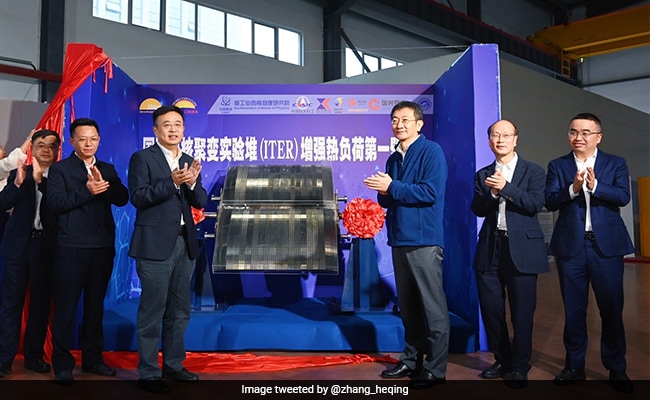 The $22 billion project is predicted to begin operation in 2025.

China has completed work on a key component of the International Thermonuclear Experimental Reactor (ITER), also known as the world's biggest "artificial sun".

ITER is an international nuclear fusion megaproject based in France. It is an unprecedented international collaboration of 35 countries including the United States, China, 27 European Union nations, the United Kingdom, Switzerland, India, Japan, the Republic of Korea and Russia. It is hoped that the reactor will be able to produce clean energy using the same process that fuels the Sun.

To do this, researchers are trying to harness nuclear fusion - the process that takes place in the centre of stars. The process involves the fusion of two lighter atomic nuclei to form heavier ones, which releases a huge amount of energy. According to Newsweek, the main goal of this project is to demonstrate that it can produce significantly more energy than the energy supplied to initiate the reaction process, resulting in a gain in power.

Also Read | Do You Really Need To Drink Two Litres Of Water A Day? New Study Says No

Europe is responsible for the largest chunk of the construction costs - around 45 percent - while the remaining nations each contribute around 9 percent. Countries also contribute to the ITER project by delivering completed components, systems or building infrastructure.

Now, on Tuesday, China state media announced that the manufacturing of a full-size prototype of a component known as an enhanced-heat-flux (EHF) first wall (FW) panel had been completed while its key indicators met design requirements. As per Global Times, the full-sized prototype piece of the EHF FW was developed by the Southwestern Institute of Physics, which is affiliated with the state-run China National Nuclear Corporation.

Also Read | Chinese Boy Watched Too Much TV. What His Parents Did Sparks Debate On Internet

The ITER's first wall panel will come in direct contact with plasma as hot as 100 million degrees Celsius, making it a critical component of the reactor. As per scientists, each of the 440 plasma-facing first wall panels of the ITER blanket measures 1 x 1.5 metres.

"In this space we are going to have a machine in the heart of which a small sun will burn, to put it very simply. This small sun will generate energy. We will use that energy to create electricity," ITER spokesperson Robert Arnoux told AFP.

China's technology to produce the first wall panel has become the first to pass international certification. As per Newsweek, the $22 billion project is predicted to begin operation in 2025.