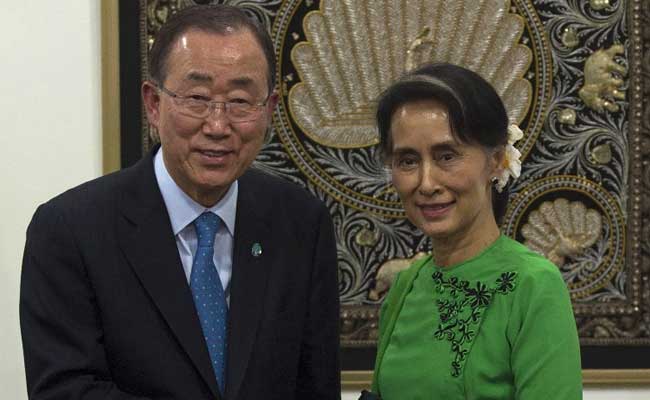 The UN chief met Aung San Suu Kyi before the talks between the government and ethnic minorities. (AFP)

Naypyitaw, Myanmar: UN Secretary-General Ban Ki-moon told Myanmar today that the world is very concerned about the tens of thousands of Rohingya Muslim refugees who have been living for more than four years in camps in northern Rakhine state after fleeing violence from the Buddhist majority.

"They deserve hope," Ban said at a joint news conference with Myanmar leader Aung San Suu Kyi. "All of Myanmar's people, of every ethnicity and background, should be able to live in equality and harmony, side by side with their neighbours."

Ban is in Myanmar to attend peace talks aimed at ending half a century of conflict between the government and the country's many armed ethnic minority groups. The talks begin Wednesday in Naypyitaw, the capital. About 2,000 delegates and guests are expected to attend the opening ceremony.

Suu Kyi, who leads Myanmar with the title of state counselor and is also foreign minister, said, "We are doing what we can to make sure that all groups can attend, but to attend or not is up to them."

Ban also said there is a "heightened expectation" of faster progress under Suu Kyi's leadership on issues facing the country, and that the international community and Myanmar's government should work together to overcome them.

He spoke of the country's remarkable journey from military dictatorship toward democracy, but warned too of the many challenges Myanmar faces, including the plight of the Rohingya Muslims.

More than 100,000 Rohingya have been living in unsanitary camps since fleeing their homes in Rakhine state starting in 2012, following deadly violence driven largely by Buddhist mobs. Many Buddhists view Rohingya as illegal immigrants from Bangladesh, even though many have been living in Myanmar for generations.

Even the word "Rohingya" is extremely controversial in Myanmar, though Ban used it without hesitation during the brief news conference. Suu Kyi's government has said it would rather that the term "Muslims in Rakhine" be used.

Promoted
Listen to the latest songs, only on JioSaavn.com
While saying he understood the need for patience in tackling the problem, Ban reiterated that the international community is concerned about the Rohingya's situation. He commended the government for setting up a special advisory commission on the situation in Rakhine state that will be chaired by Ban's predecessor, Kofi Annan. It is to convene for the first time next week in Yangon.

This is Ban's fifth visit to Myanmar.