Without School, Children Of Mosul Feared Lost To Poverty And Conflict 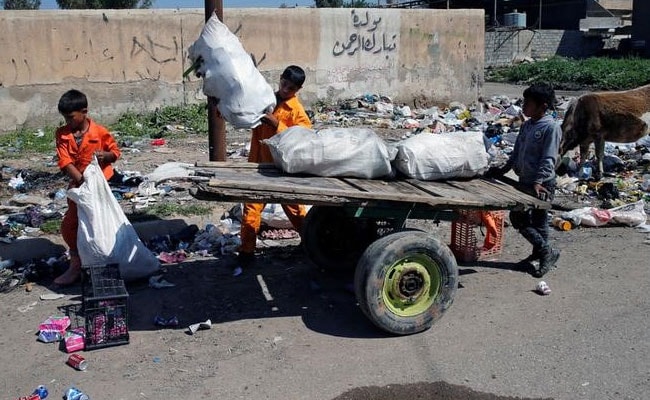 Children collect scrap in front of a school in eastern Mosul, Iraq.

Mosul: Ahmed Abdelsattar was 14 when ISIS swept into Mosul and declared a "caliphate" in 2014. Fearing he would be indoctrinated and sent to fight by the terrorists, his parents took him out of school. Three years later, he sells ice cream at a refugee camp for internally displaced Iraqis. His family has lost their home and his father is too old for the manual labour positions at the camp, which means he is his family's sole breadwinner.

Coupled with a shortage of teachers, books and supplies, the 17-year-old sees no reason to go to the makeshift schools set up in the Khazar camp near Erbil.

"Going to school is now useless. I am helping my family," he said. He adds that it is too late for him anyway. Had his education not been interrupted, Abdelsattar would be graduating in a few weeks.

Abdelsattar is one of tens of thousands of children orphaned or left homeless by the war on ISIS and forced to work to support their families in Mosul, the terrorists' last major city stronghold in Iraq.

Returning these children to school is a priority for Iraq to end the cycle of sectarian violence fuelled in part by poverty and ignorance, the United Nations says.

"Investment in education is urgently needed, without which Iraq could lose an entire generation," said Laila Ali, a spokeswoman for the UN's children agency UNICEF.

"Children from different ethnicities and religions, in the same classroom, will promote a cohesive society and will get children to think differently."

Even in the half of Mosul east of the Tigris River that has been retaken by Iraqi forces, where 320 of the 400 schools have reopened, Reuters interviewed dozens of children working as rubbish collectors, vegetable vendors or mechanics.

"I did not go to school because ISIS came and they would teach children about fighting and send them to fight," says 12-year-old Falah by his vegetable cart in Mosul.

Within earshot, fighting was still raging. Just across the river, government troops, artillery and aircraft were attacking ISIS's last stronghold in western Mosul.

Falah has four younger brothers. None of them have ever been to school.

ONE PLUS ONE EQUALS TWO

Huzayfa studied up to the fifth grade but stopped when ISIS came. The terror group taught math using bullets, rifles and bombs, said the 12-year-old, who sells scrap metal.

"They taught us 'one bullet plus one bullet' and how to fire weapons," he said.

The local education department in Nineveh province, of which Mosul is the capital, estimates 10 per cent of children in east Mosul are still out of school. There has been no official count for almost four years, it said.

There are also no official statistics on the dropout rate, a spokesman for Iraq's Education Ministry said, especially as many families have fled Mosul or Iraq altogether. 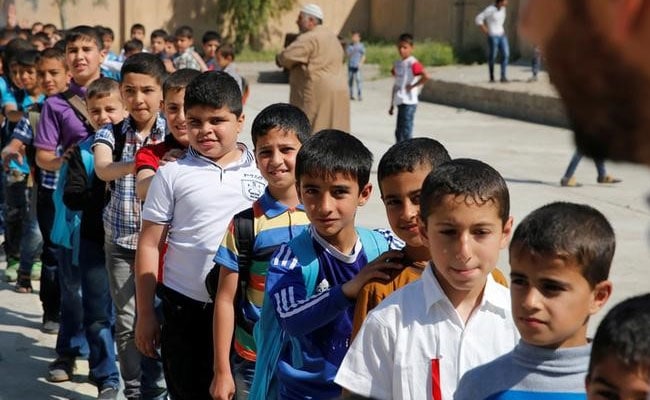 Children stand in a line to attend their class at school in eastern Mosul.

"We are counting on parent-teacher conferences and local officials to convince parents to send their kids back to school," said Ibrahim al-Sabti.

Government funds normally allocated to education have been depleted by corruption and mismanagement, lawmakers and non-governmental organisations say, citing the results of investigations in 2014 and 2016.

Oil-rich Iraq historically had very high literacy rates and primary school enrolment was 100 per cent in the 1980s.

Illiteracy became rampant after international sanctions were imposed due to the August 1990-1991 occupation of Kuwait. Economic hardship was made worse by the civil war that broke out after the 2003 US-led invasion that toppled Saddam Hussein.

Schools in east Mosul started reopening in January and so far around 350,000 students are back in class, compared to 183,229 in 2013, with much of the increase due to displaced people from west Mosul and surrounding villages.

UNICEF estimates around 1.2 million Iraqi children are not in school nationwide.

The Iraqi military expects to dislodge ISIS from the rest of Mosul in May but the militants are mounting a strong resistance in the densely populated Old City.

For children like Ahmed Abdelsattar, whether or not the group is finally ousted from Mosul has little bearing on their fate.

Promoted
Listen to the latest songs, only on JioSaavn.com
If he is lucky, he will return to where his home used to be in western Mosul's Al-Jadida district, an area where local officials and eyewitnesses have said as many as 240 people may have died in March when a building collapsed after a blast, burying families inside.

"The future is lost," he said with an air of resignation.
© Thomson Reuters 2017