With Eye On China, This Remote US Island Is Once Again Becoming Strategic

The miniscule coral atoll, which pops up unexpectedly from the ocean's steel-grey expanse, seems an unlikely place to find a permanent military presence. 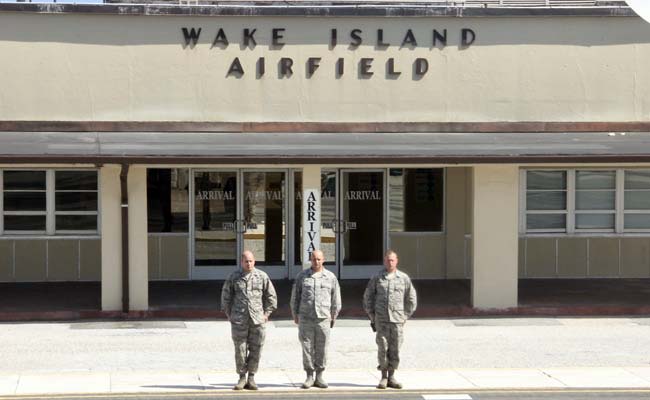 Wake Island, United States: Life on Wake Island seems, much of the time, rather sedate.

The blank "Flight Movement" board at this tiny airfield in the middle of the Pacific promises zero flights, and no movement.

But every day or so, a US military plane touches down to refuel or deliver cargo, bringing a burst of activity to one of the world's most remote places.

The miniscule coral atoll, which pops up unexpectedly from the ocean's steel-grey expanse, seems an unlikely place to find a permanent military presence.

It is located more than 2,000 miles (3,500 kilometers) west of Hawaii, and four US troops live here year round.

Thanks to more than a century of military history and a changing power dynamic in the region, this speck of sand and stones will continue to pack an outsized strategic punch for America.

"There's so much honor here on Wake," says Air Force Captain Marc Bleha, describing how the island saw one of the first US engagements of World War II, when Marines repelled a Japanese attack just days after the bombing of Pearl Harbor.

"It's humbling to think back... to when Marines were defending the island. They were running from bunker to bunker."

The Japanese came back days later, reinforced and better organized, and this time they took the island. Several US bunkers and other remnants of the conflict remain largely intact.

The coral beaches, once stained with wartime blood, are now strewn with plastic rubbish, grim evidence that parts of the Pacific have become a gyre of manmade waste.

Bleha, who is on a yearlong tour overseeing three enlisted men, ensures a permanent military presence on the island, where the sun sets long before mainland America's day has even begun.

All told, 85 people live here on a semi-permanent basis, contracted in one way or another to keep the island running.

Today, after decades of relative calm across the Pacific region, Wake Island is taking on renewed strategic importance.

China is aggressively growing its military and pushing its footprint deeper into the Pacific, and wants to coax neighbors to shed old economic and military ties to the United States and partner with Beijing.

Officials like to talk about America's Pacific presence as vital for "projecting power" into the region, where rivals like China are writing a narrative that President Donald Trump and his tariff-imposing, "America First" agenda mean the US no longer cares about what happens here.

"Obviously I reject that," General Joe Dunford, the chairman of the Joint Chiefs of Staff, told reporters traveling him following a visit to Wake Island last month.

"If you look at the health of our alliances in the region... The evidence reflects anything other than a decline in Pacific power. We have enduring interests here, we have enduring commitment and an enduring presence in the Pacific."

That presence is visible across the region, including on Wake and Guam -- located 1,500 miles further west -- and at a string of US bases on Japan, South Korea and elsewhere.

Wake Island also plays a key role in America's efforts to block a ballistic missile attack from a rogue regime such as North Korea.

The Missile Defense Agency uses the atoll to test its missile-interceptor systems designed to smash into a rocket headed toward US soil.

Dunford's Pacific trip came on the heels of other visits by senior Trump officials, including Defense Secretary Jim Mattis, then-secretary of state Rex Tillerson and the president himself.

They want to show that as China rises, America is not reducing its hold on the Asia-Pacific, where to a major extent it has underwritten regional security since the end of World War II.

Promoted
Listen to the latest songs, only on JioSaavn.com
During his brief visit to Wake Island, Dunford, a Marine four-star, paid his respects at a small monument to the US Marines and sailors killed during Japan's invasion and occupation.

The concrete memorial, topped with the Marine Corps' globe-and-anchor motif, reads: "Enemy On Island, Situation In Doubt," memorializing the radio transmission the atoll commander sent his comrades in Hawaii during the Japanese invasion.