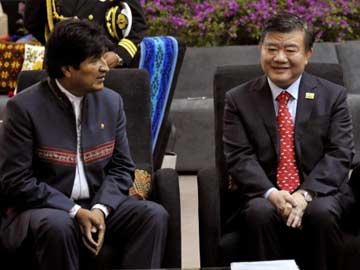 The President of Bolivia and President pro tempore of the G77 + China, Evo Morales (L) speaks with China's vice-chairman of the Standing Committee of the National People's Congress, Chen Zhu, during a meeting in the framework of the G77+China Summit in Sa

UN Secretary General Ban Ki-moon and Bolivia's President Evo Morales were scheduled to inaugurate the G77 summit, which marks the 50th anniversary of the group's founding. It has grown from 77 developing countries in 1964 to 133 member states, encompassing two-thirds of the world's countries.

"This summit is not purely commemorative, it will propose new social policies," said Morales, a leader of Latin America's radical left and the group's current president.

The summit closes Sunday with a document that Bolivia's Vice President Alvaro Garcia Linera described as "the first draft of the post Millennium Development Goals," a set of UN goals that are approaching their 2015 expiration date.

The world is still well short of fulfilling the original eight Millennium goals, which included a call to reduce the number of people living in extreme poverty by half.

Other goals included guaranteed access to primary education, equality for women and girls, reduction of infant and maternal mortality and diseases like AIDS and malaria, and facilitating access to potable water.

China, which is not a G77 member, is participating in the summit, partly in a nod to its expanding trade ties in Latin America, although President Xi Jinping will not attend.

China will be represented by a vice chairman of China's National People's Congress, Chen Zhu.

With massive purchases of commodities and exports of its manufactured goods to the region, China in recent years has emerged as a main trade partner of many Latin American countries.

Beijing now seeks a new model of cooperation that would marshal large investments for infrastructure projects needed to sustain growth in Latin America.

During a tour of the region in May, Chinese Foreign Minister Wang Yi said Beijing intends to invest more in Latin America and raise relations to a new level.

Brazil's President Dilma Rousseff, who has her hands full as host of a World Cup that has sparked street protests, is not attending.

Neither are Chile's President Michelle Bachelet, whose country is at odds with Bolivia over a maritime dispute, and Colombia's President Juan Manuel Santos, who faces tough elections on Sunday.

Before formally opening the summit later in the day, Morales will attend a session here with leftist social activists. Maduro, whose own leftist government faces mounting public discontent, was expected to attend along with his counterparts from Cuba and Ecuador.

Promoted
Listen to the latest songs, only on JioSaavn.com
Santa Cruz, the richest and second largest city in Bolivia, has pulled out the stops for the summit, the G77's first in Latin America.

It has repaved roads and upgraded infrastructure in record time, but the preparations have been dampened by torrential rains.
Comments
ChinaG77Bolivia