The Chinese pair have been skating together since they were teenagers, building a strong working relationship that propelled them to two world championship titles and silver at the 2018 Olympics. 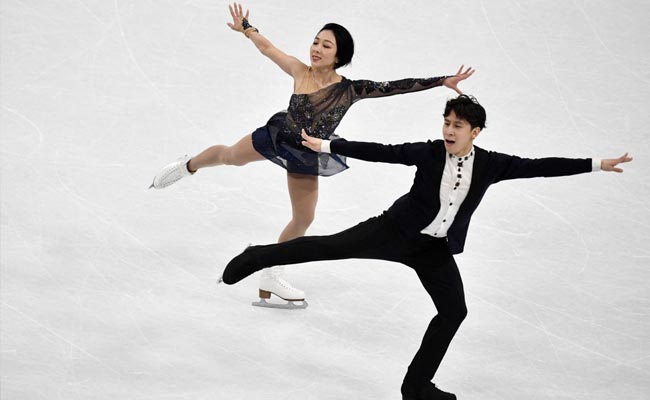 The pair have a deep understanding forged from 15 years of performing together.

Sui Wenjing and Han Cong have an intense bond that has overcome injury setbacks and sparked persistent rumours of romance -- and makes them among the favourites for figure skating gold at next month's Beijing Olympics.

The Chinese pair have been skating together since they were teenagers, building a strong working relationship that propelled them to two world championship titles and silver at the 2018 Olympics.

Now they hope to go one better at their home Games.

"On the ice we give each other enough trust and support," Sui, 26, told the Beijing Olympics YouTube channel.

Her skating partner, the 29-year-old Han, added: "It is very important that we have common goals."

The pair -- winners of Skate Canada and the Italian Grand Prix at the end of 2021 -- have a deep understanding forged from 15 years of performing together.

Coached by Zhao Hongbo, half of the first Chinese Olympic pairs champions, their closeness has prompted speculation over the years that the two skaters might be more than just friends.

A tender kiss by Han on Sui's stomach during the 2019 world championships in Japan lit up Chinese social media.

But the two have always denied being romantically involved, with Sui calling Han her "second dad" and joking that he "talks too much".

Despite a foot injury as a teenager that made him almost give up skating, Han was coupled with Sui in 2007 and the young duo soared to become junior world champions three years later.

Their first achievement on the senior circuit was to win the Four Continents Championships in 2012.

But their joy was short-lived after being hit by a series of misfortunes that threatened to derail their careers.

Sui was diagnosed with a painful bone disease the same year and the rupture of four foot ligaments.

Their training was put on ice again in 2016 while Sui had ankle surgery.

Han rehearsed alone while she recovered at hospital, but said he never felt he was training by himself.

"It's like she was beside me all the time. Everything we did during that time, it's like we did it together," Han said in the Beijing Olympics interview.

They returned to claim the world championships pairs title for the first time in 2017, in an emotional performance to Simon & Garfunkel's "Bridge Over Troubled Water".

But Sui's ankle surgery was only the beginning of an injury-hit run -- she suffered a stress fracture in 2018 and later a waist injury, while Han had surgery on his hip joint in 2020.

Their grit and sense of fun has built them a large fanbase at home, where they are recognisable faces and appear on advertisements for products from cars to cookies.

"They know each other really well, admire each other, have fun together," their choreographer, the Canadian Lori Nichol, told NBC Sports last year.

"Skating is such a tough sport and the training for it is incredibly hard work, but they've learned it doesn't have to be drudgery."

Over the last two years, their training has been disrupted by Covid-19, with Nichol based in Toronto and working with the couple over Zoom.

But she said their sense of humour means the pair has "tons of fun".

"When you've been together for so long you have inside jokes and you have really adorable things the other person does, and they choose to focus on that."

Now Sui and Han hope that four more years of hard work will upgrade them from silver to gold on home turf in Beijing.

"We will shine on the rink at the Games," Sui promised on Chinese social media platform Weibo.

The pair hope to inspire more young people to the ice in a country where winter sports are in their infancy.

Sui told state broadcaster CGTN they want to "show the best" of themselves to the domestic crowd.

"We hope more people will come to the ice rink after watching our performance," she said.