Winnie The Pooh Brings Laughter To Indonesia Kids After Earthquake

Volunteers are cheering up children across Palu with songs and games as the youngsters come to grips with a city hollowed out and twisted by nature. 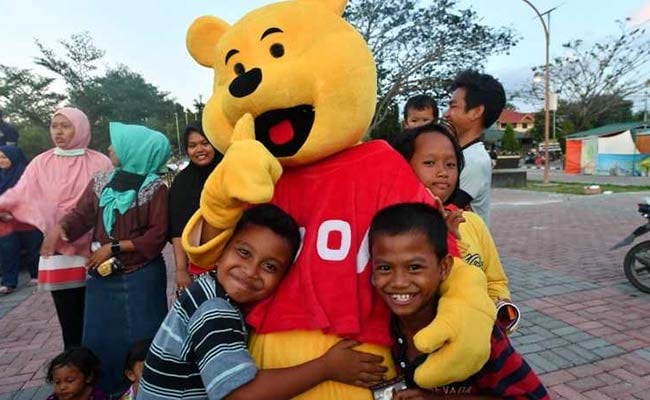 Indonesian kids hug a Winnie the Pooh character as they attend a trauma healing program in Palu. (AFP)

Shrieking with delight, Indonesian kids in disaster-struck Palu rush to cuddle a giant Winnie the Pooh, his horseplay and goofy smiles drawing big smiles in a park surrounded with rubble.

Volunteers are cheering up children across Palu with songs and games as the youngsters come to grips with a city hollowed out and twisted by nature.

An earthquake and tsunami on September 28 has killed close to 2,000 on Sulawesi island and the carnage is still raw, with thousands more believed buried underneath the rubble.

The confronting scene is especially grim for the estimated 180,000 youngsters affected by the disaster.

Erna wanted to offer a distraction from the misery.

She threw a Winnie the Pooh costume and other props in a car, gathered some friends and drove three hours to Palu.

There, a volunteer sweated in the tropical heat inside the red and yellow suit as kids giggled and embraced the loveable bear.

"I felt sorry for the children, and I didn't want them to be traumatised," Erna told AFP.

Aid workers on the ground said many children were shocked and distressed by the scale of the disaster.

Many were orphaned or separated from family in the terrifying aftermath as buildings crumbled and a wall of water crashed over the city.

Across Palu, efforts are being thrown into getting smiles back on kids' faces.

Some volunteers have brought toys to replace those lost in the chaos.

Others have organised badminton and football matches, or enraptured kids with fun stories.

Save the Children has teamed up with local charities to run safe spaces for kids to play while their parents gather food and other desperately-needed supplies.

"Play is an extremely important part of a child's psychological health and wellbeing," said David Bloomer, a child protection technical adviser with Save the Children.

"It gives them a chance to regain a sense of normalcy in a world that has changed around them."

(Except for the headline, this story has not been edited by NDTV staff and is published from a syndicated feed.)
Comments
Indonesia earthquakeIndonesia tsunamiWinnie the Pooh